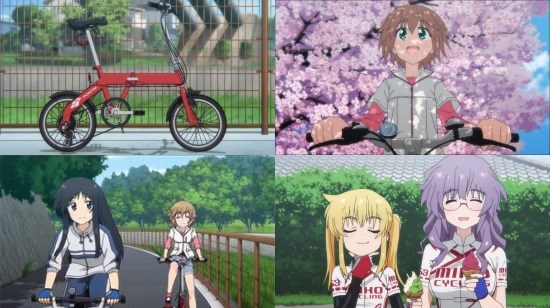 Anime revolving around all-girl clubs haven’t exactly been a rarity - not since K-ON skyrocketed the genre to new heights at least - but for whatever reason quite a lot of them never quite seem to be able to sustain themselves for the full run. There’s no apparent hard-and-fast reason for this but whether they go too wacky, focus too much on slice-of-life drama or just never flesh out their characters fully there’s no denying that despite the number of shows in this genre, very few ever seem to be consistently good. This season studio Actas have brought us the adaptation of manga series Long Riders - will it prove to be a success or the next in a long line of also-rans?

Ami Kurata is a new college student who begins to take an interest in the idea of bicycles after seeing her best friend Aoi using one to commute to college. Whilst she’s initially reluctant due to the size and cost of the bikes she eventually purchases a small folding bike she calls ‘Ponta-kun’ and, following a short ride at the weekend, begins to fall in love with cycling. Together with Aoi and new college friends, the feisty Hinako and motherly Yayoi, she begins to fall in love with cycling with the aim of entering into a brevet alongside her new friends.

There’s something about Long Riders that feels really refreshing to watch. It’s the fact that unlike so many all-girl club shows this one (as well as ditching the actual club part of the show) is focused on a very grounded approach to its core concept.  There’s no sense anywhere that the show is going to go off the walls with some weird event or encounter a motorcycling Jesus (et tu Bakuon?) and instead we’re going to be taking a much more real-world view about cycling for pleasure... and you know what? It’s really fun to watch. Seeing the world through Ami’s experiences as she learns everything from scratch allows even the most inexperienced viewers to get a look at what the hobby is like and I suspect that the more experienced cyclists will likely get a kick out of seeing someone live through what they did when they first started out. The fact that it’s all so realistic helps too, from basics like Ami experiencing ‘hunger knock’ through to the highly realistic and detailed bikes that the girls ride. In fact the only thing that doesn’t really ring true is that it takes four episodes before anyone bothers to point out to Ami that the reason she’s having so much trouble is that her folding bike isn’t suitable for the kind of cycling she wants to do (the idea of biking up some of the hills she attempts on a small, heavy bike with such tiny wheels gives me chills!)

Visually Actas have done a great job here – whilst nothing overly stands out the show does look great and the push towards realism has really helped make sure everything looks instantly recognisable, with most of the time seemingly spent on some gorgeous backgrounds and realistic modelling for the bikes themselves. Nao Toyama (who ironically played Rin in the girls motorcycle club show Bakuon earlier this year) does a great job as the instantly sympathetic and lovable Ami and the rest of the cast feel like a really natural fit with some really great chemistry between them.

There’s genuinely not really anything bad to say about Long Riders thus far – it’s very clearly and quickly established exactly what it’s going to be doing and its putting all of its effort into doing it as well as possible. Sure it could look a little better and the music could be more memorable but the same could be said about any number of shows. All it really lacks is any real drama between its characters, but in this case I’m absolutely okay with there not being any as the show just really works as it is and is a joy to watch. Fingers crossed that the rest of the series can keep up this standard as things have gotten off to a great start!

You can currently watch Long Riders in streaming form on DAISUKI

8
The Tour de France of anime.