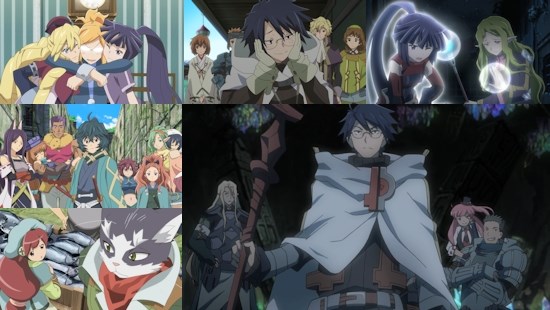 It might continue to live (albeit unfairly) in the shadow of Sword Art Online, but Log Horizon continues down its rather different track within the "real people trapped in a video game" genre. As a latecomer to the show after countless recommendations, I found myself slowly but surely drawn into its well-crafted world of politics, economics and social issues revolving around a group of MMORPG players dumped into their favourite fantasy world made real, and its second season promised more of the same, as Dan Barnett explored with his thoughts on the early episodes of the series.

Log Horizon certainly has plenty of stories that it wants to tell, and ironically it's this very fact that becomes the biggest detriment of its first half, as it tries to tackle a number of major story arcs simultaneously. Firstly, you have Shiroe's plot to improve the financial state of Log Horizon and the adventurers that his group oversees; secondly, you have some strange goings-on in Akihabara that arrive at the worst possible time, bringing danger to this previously safe haven; and finally, Akatsuki's concerns about her position in the world and abilities sees her trying to seek new ways to improve herself.

Each of these stories is strong in its own right, and worthy of focus... and that's exactly the problem, as all three arcs vie for space and none of them gain quite enough traction to work to their fullest extent. Don't be mistaken, there are some great episodes and moments spread throughout the first half of the series, and Log Horizon continues to use its world as the catalyst from some thought-provoking story-telling, but you can't shake the feeling that there was so much more room for exploration than any of these tales were afforded. Piled atop this are further moments of huge import surrounding the changing world around the cast - moments which also suffer from a lack of attention, and that are only referred to occasionally subsequent to their arrival when they seem like they should be occupying far more of the cast's thoughts and concerns.

Moving into the second half of the series, things only look likely to get worse in terms of entertainment value, as we're all set up to follow the show's group of younger adventurers as they embark upon their first major quest - hardly the kind of fare to have you salivating, given that the narrative around these characters has often been some of Log Horizon's weakest fare. However, what initially looks set to be a run of the mill quest ties into some seismic shifts in both how the world is viewed (by us and the characters), and ultimately the world itself, as some groups seek to fundamentally break how certain "mechanics" work and, by the end of series, we move a little closer to understanding what might be the truth behind how this world functions and how it might allow the adventurers trapped there to return home... assuming that they even want to, that is.

For all of its flaws, the second half of Log Horizon's second season ultimately comes to represent much of what is so good about the series - some great social and political commentary, some heart-felt drama as our adventurers become increasingly torn between a desire to return home and to do what's best for their adopted new place of residence, and plenty of intelligent use of the concept of an MMORPG made real and what that might mean for the various systems and mechanics that make up such a world.

Log Horizon might not have the visual splendour of, say, Sword Art Online, but it still makes the most of its limited animation and style to give impact to events - it can still make a major raid compelling no matter how often it has to resort to pans over still frames, and its voice cast put across plenty of sincere emotion into some surprisingly touching moments which underpin aspects of this second season. In short, it's a triumph of hard work over lots of time and money to lavish upon the production, and thankfully this means that the animation rarely if ever undermines the strengths of the source material.

Even considering its issues with pacing and giving some of its core tenets the time and space they need to breathe, there's still a lot to like about Log Horizon and its second series - it has no shortage of great characters (and Tetra, but let's not enter into that argument just yet), plenty of interesting ideas and relays a lot of them with emotional impact and consideration. It's these facets of the show which continue to cement Log Horizon's place as "the thinking man's Sword Art Online", and given how this season ends we'll be at the front of the queue hoping for - nay, demanding - a third series.

7
It doesn't afford some of its material the time to breathe that it deserves, but there remains a lot of engaging and sometimes thought-provoking material to enjoy from Log Horizon.
LATEST REVIEWS