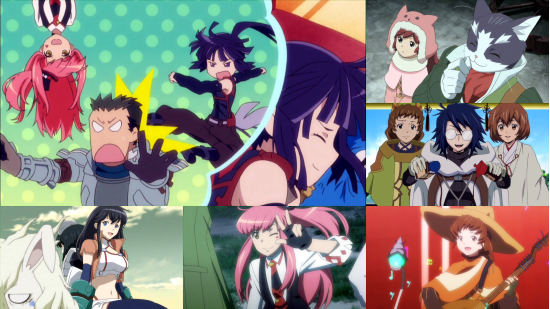 I have long admired Log Horizon for addressing adult themes and questioning the nature of society and existence. Over the last three parts we have watched this universe create its own functioning society and economy, and we have seen those trapped in the game evolve and grow to survive in this new world. One of the earliest questions was the nature of mortality in the game. Quite simply, the NPCs - the people of the land - die. The adventurers, that is the players, are essentially immortal.

As the year anniversary of the incident which trapped all players in the game passes, it is becoming more and more evident that not all are happy to be living in the world of Elder Tales. The inability to see family, children, loved ones, and their former life, as well as the continuous burden of fighting in a game has taken its toll on some players, turning them into desperate zombies who seek nothing but more combat and the chance to die and then resurrect just to see a glimpse of their former lives and memories.

These players are revered by the people of the land as a band of knights, the Odyssey Knights, who will repeatedly die and take on any monster, saving lives but at the same time fulfilling their need to satisfy the addictive urges to see their previous life. Considering that they feel pain in this world, this act demonstrates the desperation of the players and hit me rather hard. Yes, there are other plots being driven in the series, but for some reason I find myself obsessed with this aspect of the series. Immortality, especially with this kind of price, is interesting to me.

So, obsessions aside, let’s focus on what else emerges at the tail end of season two. We finally get to meet the alternative character for Shirou. The demon with glasses has himself a female vampire alter-ego who, while being insanely powerful, has her own fixations with family. Unfortunately, like many other character back stories and other plot lines, the nature of her past, why she exists, where she came from, never actually gets resolved. A similar issue occurs with the issue of the princess, the other leaders of the guilds, and it isn’t helped when Log Horizon brings in the existence of other servers, and even a colony on the moon.

Log Horizon has a bit of an issue with respect to having too many characters, too many leads and not enough time to actually resolve any of them. None of the major plot lines are continued or resolved, which starts to get frustrating. One of the major plot lines raised in this second part of season two is the introduction of the possibility that there are observers in a base on the moon, the “Beta server”. If they can be contacted, then perhaps those trapped in the server can be released. Then, the possibility that in fact this universe within the game was created by aliens to collect mana points they call “Empathium”, a name which is just a play on words for MPs, is raised. It’s starting to feel a bit of a mess to be honest. This doesn’t mean that the series isn’t enjoyable, but at times I honestly think that the series has lost the ability to actually tell the story. Although still interesting, it is frankly a mess in this second half, which when the series comes to the end after an odd build up, so much is left unanswered with no clue as to what will happen next.

No, they don’t go home and yes, they remain trapped in the game. Many of the interesting questions remained unanswered and this left me, quite frankly, dissatisfied. I love Log Horizon, but I think that this second series needed more of what made the first great, more focus, and less splintering of the story line.

That being said, I was happy to see more of this series, but I would love to see how it ends and ties up all of these loose plots even more. I just want to know if the characters to whom I have invested so much emotion for actually make it to the real world.

5
Poor storytelling lets down this final instalment of Log Horizon.