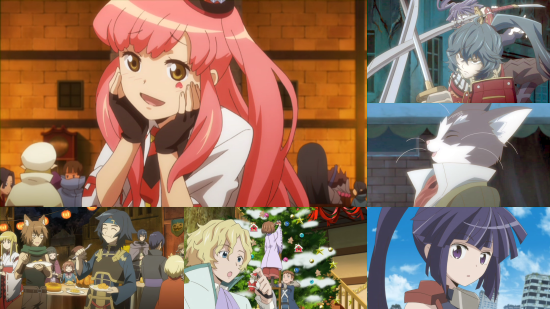 I spent many years buried in the massively multiplayer universe of EVE Online. Alas, it was a universe which lacked much of what Elder Tales has to offer (there were no catgirls for a start) but it functioned in a similar way to the real universe, so much so that a full-time economist was hired to study the capitalist universe in detail. The in-game currency, ISK, was offered in the forms of bounties for killing enemies, and this ISK was spent on either player crafted or universe provided items.

Now, in theory Elder Tales works exactly the same way. You kill a monster, it spawns gold and loot. The adventurers gather this gold and it returns to the system. But actually, what happens? Where does the gold come from and why does killing say, a small purple slime monster, cause gold to appear? If gold only comes from killing monsters, then can it be earnt by doing something else? Can the People of the Land get gold? Trust Shirou to ask these questions to solve the societal issues impacting the Yamato server which became evident after the huge Goblin King invasion. The growing inequalities between the Adventurers and the People of the Land are pushing the land towards war and the only solution is to find a way past this. Cue Shirou fleeing Akibhabara to work a way out of this situation in the only way he knows how. It’s time for an epic raid against the system itself to force the keepers of the system’s gold fountains to open the system up to everyone.

Doesn’t it sound heroic? The problem is that in a world where you give up part of yourself to be reincarnated and where the major treasures involve fighting gigantic bosses across multiple levels it's not going to be pretty, which leads me quite nicely to the revelation about reincarnation within Elder Tales.

Reincarnation has a price. It was known that people lost memories when they were reincarnated, but it was never clear that this was actually a price to be paid in the in-between world between life and "death", and it all becomes clear when Shirou and Akatsuki meet each other when they both die on their respective adventures. Reincarnation works, and it becomes evident that the memories aren’t lost, they are just misplaced. They remain within the system, but they just no longer belong to the adventurers. Unfortunately we are still no closer to the truth behind why the Elder Tales universe exists, but as the series moves on we do learn that the universe’s rules are still evolving. Both the People of the Land, those NPCs who have become real people, the magical items with random text to give them substance (text that is now itself becoming real), and now the protectors of the Adventurer’s cities - the Royal Guard - turning on those they are out there to protect.

Although the first season of Log Horizon wasn’t the lightest of fare, this half of the second season adds some gritty meat to flesh out the universe of Elder Tales more. Watching Shirou and his party fight futility and falling morale in the dungeons and Akatsuki taking on her murdering super-powerful nemesis are just a couple of examples of the developments the series has taken, although much of the fluff and development which made the first series so enjoyable remains. What made me smile was actually how Log Horizon has evolved to deal with those players who are cross-playing. In the game, male players who play female characters became female in the game. Over time, the influence of the game has reduced their male attributes and characteristics and made them more female, none more so than Tetora, who is of the “idol” class, can’t sing, and has a huge crush on colossal pervert Naotsugu. Their little moments together absolutely slay me.

The real star of the series is still Akatsuki. This cute little ninja, whose self-confident is damaged so heavily during her duties to protect Akihabara, grows massively as she finally discovers that being small doesn’t make her weak, but actually makes her fast, nimble and very deadly, especially with the right skills and equipment. However it becomes quite evident that if anything her time apart from Shirou has made her infatuation with him worse, and the little love triangle that has grown around the Villain with Glasses only deepens once the city celebrates Valentine's Day.

This second series of Log Horizon continues where the first left off. Watching these episodes, it feels like there hasn’t been much in the way of a gap between the series at all, and although Log Horizon’s glacial pace hasn’t improved, the additional detail that this series provides answers some key questions which remained at the end of the first series. I for one am happy events have progressed, though it’s hard to see where the series goes next. Mind you, as long as Akatsuki's cute sarcasm keeps me entertained, I don’t mind Log Horizon going and going and going...

8
Log Horizon continues diving into the world of Elder Tales