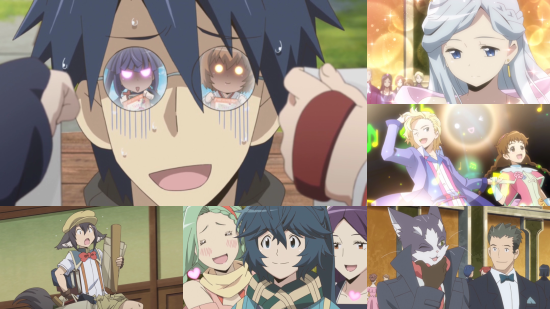 Having read through what feels like hundreds of articles about the up and coming revolution in gaming and virtual reality, I cannot help but wonder if they have maybe not gone far enough with the technology. I mean, VR is all well and good, but it clearly has some way to go before we really feel like we are in the game. I do wonder how long it will be until consumer electronics actually allow to alter our reality in a way that lets us live virtual lives and finally abandon our physical selves. There are times when I honestly think that it might not be a bad thing. Of course, it does depend on what game I end up in - if it was EVE-Online I might just regret that wish…

Anyhow, I digress. The topic of the virtual nature of game worlds and their realism has cropped up quite a bit in various media outlets recently. Log Horizon is an interesting case as with almost every other story of this nature the means of ending up in a virtual reality is at least known. For some series, it’s a game bug that doesn’t let you remove your headset, for others it’s a psychic connection, but for Log Horizon’s Elder Tales the means is still unknown. Perhaps with the further development of the story that part two of this first series delivers, the answer is just that little more accessible.

We left our stoic adventurers at the end of part one in the realm of the People of the Land, as Log Horizon and the other guilds of the Round Table of Akihabara were negotiating peace and trade with the NPCs of the world. The NPCs, as it turns out, aren’t quite as non-player as one would believe - even these NPCs, who do not reincarnate, can be turned into “immortal” adventurers. Even the adventurers, with their reincarnation, aren’t immune and with more exploration comes the price that is to be paid for being reincarnated at the cathedral. For those of us with crap memories in the first place, the thought of losing more of them is positively frightening. But, as scary as this thought is, what we have is actual development in the lore which, speaking for myself here, I think the series needed. I have found, for example (and this is how the second part begins) that the half episode of detailed universe backstory, talking about the world class spells, the introduction of monsters, demi-humans and the adventurers is exactly what Log Horizon needed to add more meat to an otherwise well-rounded universe.

One of the other developments is The Rise of the Goblin King, a former in-game monthly event which threatens to wipe out the People of the Land. In addition to this, there's the rise of the western kingdom and its mysteriously hot and very foxy ruler who clearly has some dealings with all the players being trapped in Elder Tales. Both of these events are epic in themselves, and in both cases it falls to the strategic prowess of Shirou and the rest of Log Horizon and the Round Table to counter the military or reputational threats. I do find it quite amusing that the solution to poor customer service is to counter the complaints with hoardes of very beautiful women, though it occurs to me that they have used the RPG equivalent of booth babes, except with a lot more cat ears. This is not a bad thing. A series with a lot of cat-eared girls is never a bad thing.

One a less serious note, the second part of Log Horizon finally brings us some further development on the Akatsuki front. Okay, so the microscopic and frisky ninja doesn’t quite get what she wants in the form of a hot Shirou sandwich, but thankfully it is not through any fault of her own - he is just a bit of a thick-headed individual who has the inability to see a good thing in front of his eyes, even when there are two of them trying to make an active pass for him. The joys of the anime-style unilateral love triangle, eh?

For those who are after some kind of conclusion from this first season, think again. The almost glacial pacing of the show, combined with the advent of the second season currently available on Crunchyroll means that the best you can hope for is frustration (in many different forms) in the last five minutes of the final episode; although at least this frustration was seen many episodes in advance thanks to some not-so-subtle scenes dropped throughout the narrative.

I am still rather enjoying Log Horizon. I am a big fan of Shirou, and at times I see quite a lot of myself in him. At the same time, the series had so far seemed to lack any firm sense of driving storyline, which I am happy to say has been alleviated slightly with the advancements in this second part. I only hope that season two continues with an improved pace, but doesn’t lose its focus on the universe and character building which has made Log Horizon a joy to watch thus far.

However, I certainly won’t miss that opening song. If I have to hear the word “database” one more time...

7
More revelations abound in this continuation of the series.