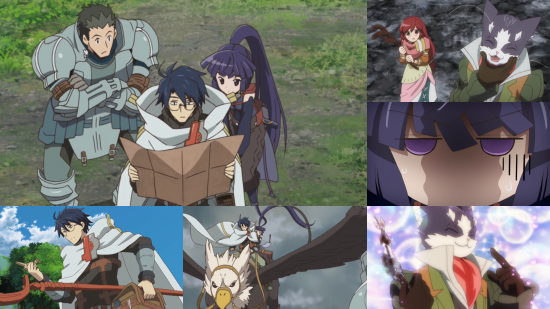 Imagine this. You spend all day and night playing an MMORPG (in my case it was almost seven years of EVE Online) and you get to the point, after so many hours of Teamspeak and cans of Mountain Dew, that your sense of reality becomes warped, and all you see is the in-game world around you. It’s creepy, even more so when you close your eyes at the end of the session, and you still see the game and are still living it. Thankfully for me, the game wasn’t my reality and all I had to escape was to log off.

But, for thirty thousand Japanese players of Elder Tale, logging off suddenly stopped being an option as they awoke to find themselves trapped within the game universe, though with their in-game bodies rather than their real ones. Given the usual exaggerations and artistic flair that self-absorbed players imbue on their virtual selves, these game bodies are "variable" to say the least. For some like Shiroe, a reclusive graduate student and long term player of Elder Tale, whose body is similar to his real one and gives him the class of an enchanter and scribe, this bodily arrangement works just fine. Being stuck in a body similar to your own is no hardship, but what if you aren’t? It’s not exactly uncommon for women to play men in games to avoid the gaze of “creepers”.

This is the situation Akatsuki, a trained assassin, finds herself in. In the game world, her normal body is that of a light, tall and strong man capable of eradicating enemies with stealth and efficiency. The problem is that when you are a five foot nothing woman who has this become your real body, things like balance become a problem. Shiroe helps Akatsuki regain her real body through the use of a transmogrification potion, and in turn, she becomes his servant. What a nice start to a series. It also helps that she is an absolute cutie, a fact that their third member - guardian, knight and resident womaniser, Naotsugu - cannot ignore. It does sound like these three are a bit of a motley crew, but on the contrary they are all highly experienced and incredibly powerful. But what of the world they are stuck in?

For the most part, it is as they left it; only the screen has been replaced. What remained was the world itself - the people, the monsters and the abilities of the adventures to respawn when they are killed. What is different is the complete lack of quests, edible food, justice and society. What begins as a fun adventure becomes boredom and violence, and quickly devolves into anarchy as the players trapped in Elder Tale realise that not only can they not leave, but they are destined to remain in a world without direction, food or society. It doesn’t take long for the guilds to start taking over, exploiting the weak and turning on the NPCs, “People of the Land” who have gained sentience with the rebirth of the game. Surely, it would take someone extremely special to bring this world to order, unite the guilds, and build a society. Only someone with a good mind for strategy, politics and manipulating humanity. Someone, for example, like Shiroe.

Reading elsewhere, Log Horizon has been compared to the likes of Sword Art Online, Another series where the protagonists find themselves trapped in a computer environment. This is a fair point, though I actually think that the series resembles something a bit more sedate. Log Horizon is less about trying not to die and more about building something. I had strong memories of Utawarerumono because of Shiroe and, to a lesser extent, Maoyu due to the varying characters and the pace. By no means is this a bad thing, as both of those series are favourites of mine and it fits with the same theme of society building, war, diplomacy and economics, intelligence and extensive universes that both series are known for. In fact, I would go as far as to say that Log Horizon is the superior product to Sword Art Online, but don’t lynch me just yet.

Log Horizon’s strength lies with the thought that has gone into building this universe and the people within it. Although it doesn’t look the best at times, and the pace starts out slow, the series comes into its own early on as Shiroe, Akatsuki and Naotsugu find themselves on a rescue mission, riding on griffin-back across the world to rescue a friend. The secondary characters, a wide cast by any anime’s standard, are all filled as the story expands with the world - it's world building done right. At the end of this first collection, the scope of the story has expanded to the point where quite frankly I have no idea where it will go next! A fledgling society is formed, alliances created and progress made, and I really like the fact that the story is beginning to focus a bit less on the “adventurers”, the players, and more on the people of the land. Unknown at the beginning is that there is now an entire empire, of which the thirty thousand players are just a tiny part. I have to hand it to the producers - this is a hell of an undertaking, narrative wise.

All is not rosy though. I have watched Log Horizon in English, as is traditional, and to put it bluntly the dub isn’t the best. The performances are flat with some of the characters and the acting proving to be generic, which is sad as at times as the writing is excellent. Add that to the over-reliance on American mannerisms, especially with Naotsugu, and it's enough to make me recommend the Japanese dub in this instance. The highlight is still the actor who plays Akatsuki. So cute!

One thing can be said about this series is that judging by its writing and art direction someone spent way too much time within the worlds of Everquest and Elder Scrolls, though I am still waiting to see the first reference to an arrow in the knee.

I came to Log Horizon only knowing about its reputation for being a surprising yet solid series, but a quality outing nonetheless. Although slow to start, and surprisingly anti-climactic at the end of this first part, it is a show that promises excitement and I can only hope it brings a satisfying delivery.

7
Building a new society in a virtual world.