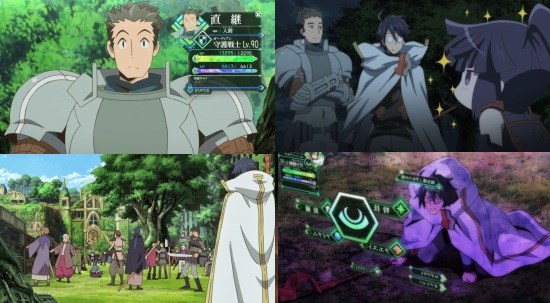 The idea of being totally immersed within the world of a computer game to the point of actually being there has been going round for a while. The idea that you could be trapped there is just as old. Given this long legacy it’s time to see if this season’s Log Horizon can bring anything new to the ideas that were previously so thoroughly covered by the likes of Sword Art Online, TRON and the .Hack franchise.

In the fantasy setting of the online MMORG Elder Tale, players are getting ready for the advent of Novasphere Pioneers, the game's latest expansion. However, as the program is set to go live every player online on the Japanese server finds themselves trapped within the game world. Every function of the game still works bar the log out command, with players even able to bring up in-game menus and voice chat, but this is no longer a game. The players now inhabit the world of Elder Tale and must strive to survive within it for, whilst death is no issue and simply results in a quick resurrection, the pain, the hunger and the fear are all too real.

Our lead Shiroe is a mage in-game and a highly rated top level character to boot, not to mention a former member of a game-famous raiding group. After finding himself stuck in the game he takes a more logical approach than most as he tries to figure out the best way to interact with this strange new world. To aid him he teams up with his former raiding buddy Naotsugu, a strong tank, and Akatsuki, a deadly assassin with the best catchphrase I’ve heard in years. The three of them are set up really well over these first three episodes, which provides a solid mix of world-building and character moments mixed in with some competent if awkward action scenes (characters have to yell out move names to use them....)  Only a couple of side characters have been introduced so far although Marielle and Henrietta, the leaders of a guild Shiroe helps out, are instant favourites and great fun whilst young Serara and her cat-headed friend who are the objectives of our hero's first quest look set to have some juicy secrets given the amount of people looking for them!

The world-building is really strong here, although given the amount it can draw from games like World of Warcraft this isn’t too much of a surprise. The details are brilliantly done though, with simple things such as food having no taste as it wasn’t programmed in or characters being clumsy as they have to adjust to avatar bodies with different proportions to their own really helping to sell the world. What doesn’t help with this however is a running monologue from Shiroe, explaining the rules and systems of the game in a pretty unnecessary fashion which outstays its welcome very quickly. The action scenes also have some issues with this alongside the aforementioned calling of move names. Hopefully this will change as the series progresses as they’re the only big flaws in what’s otherwise a very fun show.

Visually the show has a pretty simple look, but it really pushes to make it work and has some great character design to help distract from the formulaic backgrounds. The music is pretty so-so, but then in this kind of game you tend to tune the music out pretty quickly anyway so an argument could be made for this being intentional (maybe). The cast are great to listen to though, particularly Akatsuki, and it’s a great pleasure to hear Emiri Kato doing a strong action role after spending so long hearing her as Hachikuji in the various Monogatari series.

It’s not a perfect start admittedly, but Log Horizon so far is entertaining and has just enough to keep you interested. Whether or not it can build on this opening will likely depend upon if they can keep progressing the story and sideline some of the more tiresome aspects over the remaining twenty-two episodes, but I’m certainly going to be sticking with it for the foreseeable future and it has enough going for it that it won’t just appeal to the fans who’ll get all the MMORPG in-jokes.

7
A decent start, with promise of more to come.