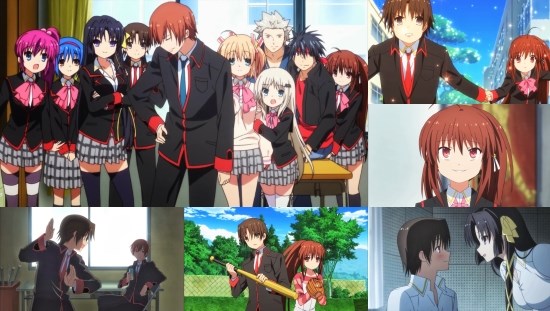 As a fan of Key's visual novels (or at least the anime adaptations of them), I have to admit that on a personal level I found Little Busters rather disappointing - it certainly had its moments, and showed some of the typical strengths of the unique story-telling exhibited by these adaptations when it came to Kud's story arc in particular, but overall it fell decidedly flat. That however, was only part of the story, which brings us to Little Busters! Refrain, the equivalent in this series' world to Clannad After Story, which thus promises to lift the lid on the true nature of this particular tale.

As Refrain begins, it's as you were for the now fully-formed Little Busters - with any troubles seemingly out of the way it's nothing but fun, frivolity and light-hearted entertainment for all concerned.

Of course, drama is never far away in a series such as this, and it's Kurugaya who becomes the focus of the early episodes as we delve a little deeper into her past and personality as she finds herself on the sharp end of some particularly malicious bullies. As per usual, it's Riki Naoe who is at the forefront of trying to help resolve this situation, but as events take some odd and decidedly confusing turns it seems to become clear that there's something more fundamentally wrong with the world itself - a realisation that ties in to the promises to reveal the secret of this world that both Riki and Rin have been chasing for some time.

It's the build-up to that revelation that is the crux of Refrain, as it teases and slowly peels back the layers on what is going on as things become ever more fraught for Rin and Riki - some friends shun them, others disappear, and Kyousuke's behaviour becomes ever-more erratic and out of character before we finally discover the severity of the situation.

This begs one very important question of Little Busters as a whole - is all of the show's build-up as a whole made worthwhile by its ultimate pay-off? I will certainly grant you that the final episodes of Refrain are very strong indeed, pulling the rug out from under the viewer in an impressive fashion before following through with this massive shift in the story to a satisfying (albeit slightly rushed) ending. The issue is that I'm not sure whether over thirty episodes of overall mediocrity can be excused by a strong climax, and even taking Refrain in isolation the build-up to that big finale really isn't all that enjoyable - it struggles to pace and time the important plot points leading up to its reveal, leaving aspects of the story to feel confusing when they should be intriguing, while the relegation of much of the cast to the side-lines strips refrain of the ability to mix up its character-driven moments effectively.

One area where Refrain is undoubtedly more compelling than Little Busters' initial outing is visually - although the overall aesthetic and character designs remain the same, the subject matter of Refrain allows the show to be more experimental and striking in its visuals, making superb use of some surreal and unusual imagery to bring home the less conventional aspects of the narrative, particularly as they relate to Naoe's mental state as questions about his world pile up around him. Coupled with strong voice acting, the quality of the presentation here is certainly in no doubt.

Just as the saying suggests that one swallow doesn't make a summer, one good plot twist doesn't make a good anime series, and in spite of its undoubtedly strong conclusion it's hard to recommend Little Busters as a whole (or indeed Refrain in isolation as it has little meaning without its counterpart). Given the company it keeps, particularly Clannad, this series was always going to have a lot to live up to, but neither its humour nor its drama is as compelling as the animated adaptation of its predecessor. While this doesn't make it a poor series, it does make it a disappointing one that only those who manage to heavily invest themselves in Little Busters' core characters will be able to glean any particular enjoyment from.

You can currently watch Little Busters in streaming form via Crunchyroll.

6
Its final episodes are excellently realised, but this pay-off isn't enough to make up for a long-winded and disappointing build-up.
LATEST REVIEWS