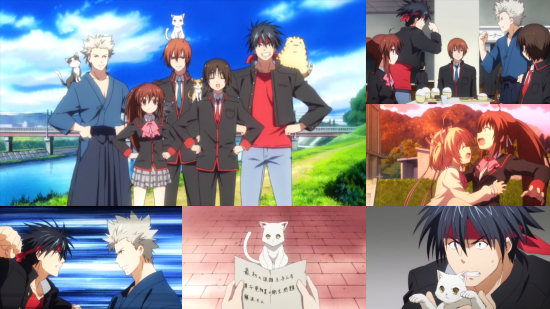 I am rather fond of just having a bunt at a series I know nothing about. When I was offered up Little Busters, an anime which is seemingly about a group of friends forming a baseball team, I figured that it was worth seeing if it could hit the ball out of the park, or whether it would be struck out. As the six discs fell out of the envelope, only then did I realise how stretched out this game might actually be. However, unlike the boredom that accompanies a game of baseball, Little Busters wasn’t dull, boring or any of those other adjectives used to describe the activities of professional baseball (and, being fair, most other professional sports). What I did find was that Little Busters was full of drama and sadness, and it piqued my curiosity enough to force a binge of the entire 26 episode series. Though, after 26 episodes I was thoroughly broken by the somewhat ropey acting and dialogue.

Before I get into the more technical elements, a few facts. Little Busters is, one of the better known visual novels, released with an all-ages rating even though it had quite a bit of romantic content on both the PC and, more recently, on the PS Vita. Little Busters was created and written by the rather prolific Key, who also created the far superior Clannad and Kanon. I will admit to having had a go at Little Busters once, and being rather drawn into the story. The game features small mini games which includes bouts of baseball practice, and some rather amusing fighting scenes, both of which are re-imagined in the anime.

The story however, is perhaps a little bit more loosely adapted from its source material, even while the main characters remain the same. Little Busters revolves around the main protagonist Riki Naoe - a boy who is a bit of a shut-in as he has a rare form of narcolepsy brought on by the mental trauma of becoming orphaned. However, at school he becomes friends with a delightful chap called Kyousuke. Kyousuke is a natural leader, and around him he has formed a group, the Little Busters. Their role? To fight evil in whatever forms it may come, and the Little Busters gang thoroughly enjoy their youth. Riki has made friends and has escaped his shut-in life, but the narcolepsy remains, continuing to stain his otherwise enjoyable life.

In high school, the Little Busters are still together. More mature and more diverse in their interests, only now Kyousuke, as the oldest among them, has only a single year left in high school and has a mission for the Little Busters to make the most of their time together. What better way to make your time together more awesome than starting a new group activity, like a sport? I know! Baseball. So a group of five, who have never played a game in their life, start their team. However, they are short a few members and it is up to Riki to recruit them.

It’s a bit hard to put into words exactly what happens next. Perhaps the only word I can use to describe Little Busters’ narrative is... antics.

Little Busters is perhaps a very normal slice of life school anime at this juncture only, in this format, it is perhaps a bit grating to begin with. Don’t get me wrong, some of the revelations - the back stories of the characters, the trauma and the revelations -  is worthy of the likes of Toradora, but my issue is that you have to get through a lot of rather difficult pacing and listen to a lot of somewhat forced acting to get there.

For reference, I make a habit of using the English dub whenever possible as, let’s be honest here, it’s just easier to watch a series when you aren’t reading subtitles. Most dubs I get on with, but I have a distinct issue with those that insist on using Japanese honorifics, and badly at that. Add to this the somewhat mis-matched voices and the stereotypical eastern European accent of a particular character, and in this case I’d strongly recommend to stick with the Japanese language track.

Unfortunately, the Little Busters anime also lacks the quite beautiful art style of the visual novel. Sure, the character designs are there, but the animation and style is quite lacking compared to the visual novel. I would have preferred if J.C. Staff had managed to actually preserve that style a bit more but alas, it isn’t meant to be. However, the series does have its moments, and a revelation of the truth about Kudryavka’s mum in particular destroyed me again. Yep, Little Busters definitely has its moments.

6
Little Busters leaves us with the bases loaded and with no batters left.