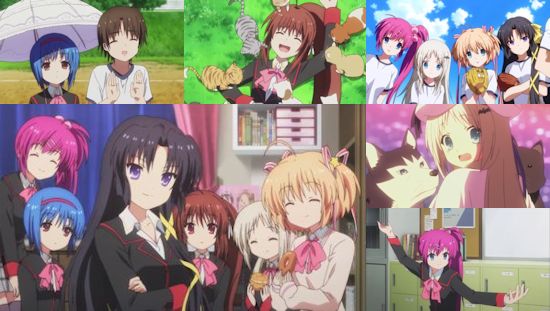 Key's visual novels (ignoring for the moment mastermind Jun Maeda's more recent anime original outing Angel Beats) have served as something of a touchstone and exemplar of the Japanese visual novel as emotionally charged story-telling device in recent years - a train of thought helped substantially by Kyoto Animation's adaptations of many of those very same stories.

There remained, however, one major Key visual novel that had been left untouched in anime form for some time, and it was to JC Staff and not Kyoto Animation that the task fell to bring Little Busters to the small screen - a not insubstantial challenge, but one that we can look in on thanks to Crunchyroll's streaming of said series to the UK.

The story begins with the return of Kyousuke, the leader of a small group of friends known as the show's titular Little Busters who have been hanging around, having fun and generally being a bit goofy since they were young. The bonds of friendship between the group are particularly enduring for our protagonist, Naoe, a narcolepsy sufferer who was plucked from the depths of depression by Kyousuke after the death of his parents.

After some time away from the group, Kyousuke has returned with a grand, albeit suitably random, plan - to craft a baseball team around the Little Busters. There's one rather glaring problem here however - the group has nowhere near enough members to fill a baseball roster. Thus, it's time to get recruiting, and it's the quiet but thoughtful Naoe himself who surprisingly finds himself at the centre of this recruitment drive.

Ostensibly, the whole "creating a baseball team" premise is simply an excuse for our central character to involve himself in the lives and problems of a number of his fellow schoolmates - all of whom are, of course, female, and all of whom have personal issues that they're struggling valiantly to cope with beneath the surface. Whether its family troubles, shyness or something decidedly more ethereal, Naoe is there to do his part, and as the series progresses so he also has a bigger circle of friends to call upon to assist in whichever way is required.

Alongside all of this, Naoe and fellow Little Buster Rin are also drawn into completing a series of tasks served to them mysteriously via notes attached to the tail of a cat Rin has befriended, promising to let them in on "the secret to the world" if they complete them all. However, don't expect for this particular plot point to be resolved over the course of the series - this is being kept in reserve for the confirmed second season which apes the end-game of the original visual novel, Little Busters: Refrain.

With each story arc proving to be relatively neatly self-contained aside from the growing roster of Little Busters in the picture, there's plenty of room to focus upon each girl's unique circumstances through to some kind of pleasing resolution - something which the series largely manages to do. Unfortunately, the execution of every arc is, to put it bluntly, rather boring - if you're used to the being captivated by the characters or moved by the scenarios but together by other Key visual novel adaptations, Little Buster's narrative seems oddly dry and free of any really impactful emotional drama. Indeed, only the story of Kudryavka (or Kud for short) has any real impact, and even this is reliant on a terrific finale that tugs at the heartstrings after some clumsy beginnings, and it remains the only time the series really leaves you with any sense of empathy with one of the show's characters.

The more difficult question to answer surrounding this adaptation is why Little Busters fails to live up to the standard set by other Key works - is JC Staff's adaptation simply subpar, or is it that the source material simply doesn't live up to that of earlier works such as Clannad? I suspect the answer is "a little of both", although ultimately the less compelling characterisation and story arcs of Little Busters leaves me suspicious that the core tenets of said story simply aren't up to the task.

Beyond its story-telling issues, Little Busters may not have the flair and beauty of KyoAni's adaptations, but it still looks decent enough - the show's character designs are striking, colourful and easy on the eye throughout, and although some of the voice acting from the show's female cast might end up grating on you it largely balances cute and competence pretty well. Musically, the series has lots of enjoyable ditties to back things up, even if it could perhaps do with a wider range of music to rely on to avoid falling into the realm of repetition too often.

Ultimately however, even if you're a big fan of previous Key anime adaptations, Little Busters is hard to recommend - it feels like a poor, sub-par performance that fails to hit any of the notes that have made other outings so successful, and its high points (be they comedic or dramatic) are too few and far between to prop up the series. It would be unfair to say that you should actively avoid the series, and its Refrain follow-up may right many of these wrongs, but if you're looking for human drama than there are plenty of better series out there.

You can currently watch Little Busters in streaming form via Crunchyroll.

5
Save for one or two episodes, Little Busters is a slog to watch that simply doesn't have enough to offer the viewer compared to previous Key visual novel adaptations.
COMMENT AND DISCUSS
blog comments powered by Disqus