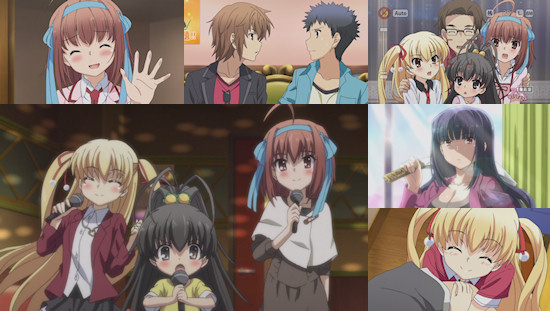 Yuuta Segawa is all set for an interesting and fruitful college life - no sooner has he entered his first year of study does he find himself fascinated by a busty and "unique" girl, enjoying the company of a good friend and a member of the campus' "sightseeing club" - even if the only sight he's really interested in is the aforementioned busty girl.

This kind of straightforward, almost selfish, existence couldn't be much more different than that of his older sister, who is happily married with three wonderful children, even if two of them are from her husband's prior marriages.  Rather than expressing jealousy at how her life has panned out, Yuuta seems quite happy to stay one step removed from it - something which sister Yuri is determined to change as she invites Yuuta without his knowledge to spend a day looking after the kids.

What's more, this seems to be nothing more than a trial run for Yuuta to look after this trio - three year-old Hina, ten year-old Miu and eldest daughter Hina - for an entire week as their parents go away on a business trip which doubles as a makeshift honeymoon for the couple.  You can probably guess what happens next, as tragedy strikes, leaving the three youngsters without parents - as the threat of them being split up grows, so Yuuta takes it upon himself to look after them, despite his cramped student's apartment and lack of money.

It actually takes the entirety of I'm Your Father's first three episodes to lay out this premise - bringing Yuuta to the fore, introducing him to the three girls, then like some kind of malevolent god striking down their parents cruelly in the name of entertainment to create what's perhaps best described as "Usagi Drop-lite".  Unfortunately, the execution of this introduction is pretty middling at best - the initial arrival of Yuuta feels messy and does little to properly lead-in to his role in the series; love interest Raika is pretty much solely on the scene as a bouncy castle; the show seems skittish about what to do with its fan service elements, throwing them around occasionally before putting them to one side for a while almost out of embarrassment.  Similarly, and perhaps because of these sloppy introductions, both the comic and emotional aspects of the series fall rather flat - the laughs around both young Yuuta's attempts at being a surrogate parent and his charges attempts to help dry up pretty fast, and it's hard to really get any proper feeling of loss or sorrow in the face of the loss of the three girl's parents.

This effectively leaves us with a series that is decidedly average - its fan service is limited and the potential for "creepiness" within the show's concept is thankfully never entirely realised (the only love interest from within the family setup is from eldest kid Hina, which is... well, okay in anime terms), but there isn't a lot to recommend in I'm Your Father either.  Once its jokes begin to fall flat and it reigns in its fan service, there's really nothing left to mark the series out as one to watch, leaving us stumbling to find anything much to say about it at all.  It's a colourful and nicely presented series with enjoyable opening and ending credit themes, but when that's the most notable part of any anime you know it isn't the kind of thing you can particularly recommend to anyone.

Put simply, if you want to see a series that delivers on the premise of an unusual surrogate father-child setup, then Usagi Drop delivers in every way, shape and form that Listen To Me Girls I'm Your Father fails to.  As a result, this pale imitation is best avoided, and some mild fan service does nothing to redress the imbalance.

You can currently watch Listen To Me, Girls, I'm Your Father in streaming form via Crunchyroll.

5
Clumsy introductions lead in to some unspectacular opening episodes of a decidedly mediocre series.
COMMENT AND DISCUSS
blog comments powered by Disqus