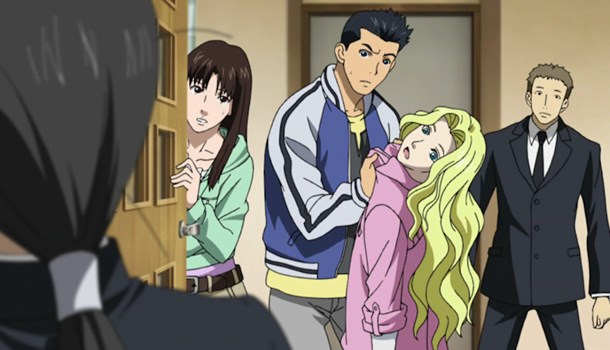 It's hard to capture exactly how much I was pleasantly surprised by Level E, and doubly so to do so without spoiling anything that would ruin the first three episodes for new viewers. But, I'll give it a shot. To let you know ahead of time, I watched this show with absolutely zero prior knowledge and if you would like to replicate that viewing experience I suggest you stop reading and go watch the show right now. Don't worry, this review will still be here once you finish.

Level E follows a similar premise to Men in Black, only without the whole secret agency angle. There are tons of different alien species on Earth, the show's intro informs us, and we humans are the only ones who don't know this due to a Star Trek style "don't freak out the underdeveloped natives" rule. The series starts by focusing on a rather dull college student who loves baseball and is moving into a new town in the middle of nowhere as he was offered a sports scholarship there. The girl next door, a rather sharp lass, has a father who works in a nearly laboratory. The new town is far out of the way of civilisation and only seems to care about baseball, with some locals in particular being rather freaky about the whole thing. All rather dull and un-interesting so far. Then, six minutes in, an alien shows up having broken into the main character's apartment and is sat there, large as life, drinking coffee and not giving a damn. Oh yes, and the alien has amnesia. Let me know if you have heard this trope before.

I have to admit, here I found myself groaning. Great, an alien crash-landed without his memory on a strange planet - at least the alien wasn't female and moe and asking "what is this strange thing you call love?" though. Then, the show proceeded to destroy my preconceptions by going in two separate directions at the same time, and succeeding marvellously at both.

First, the show is a great comedy series; not overly reliant on memes or references to fuel its jokes (although there is a perfect E.T. homage present which made me fall out of my chair laughing) but instead present actual comedic situations and character interactions instead. The word I've written down the most often in my notes is "Goony" - utterly outlandish and absurd with just the right degree of levity to maintain your suspension of disbelief. Plus, it contains my one favourite thing in anime comedies - funny faces and sound effects. I'm easy to please. Fans of the sublime Cromartie High School and Gintama would find themselves comfortably at home with Level E and its well-constructed irreverence and timing. There is another element to the comedy, which comes from the constant way it plays with your expectations. Instead of doing what you expect, or simply doing the contrary of what you expect, the show often does an abrupt turn and goes down an entirely different path altogether, one made out of hilarity and sometimes low-resolution CG hand puppets.

In addition to the comedy, Level E also has a very well constructed dramatic storyline that encompasses the three episodes I watched, spinning a well-paced yarn that contained just enough to keep me fully engaged the whole way though. I have to admit that more than once I found myself jumping out of my chair and exclaiming surprise at a new plot development, and reveling in the way that it effected the events of the whole. The last half of the third episode, in particular, I would consider to be a masterstroke in making all the developed story threads pay off in a massive way. I'm being purposefully vague as I really don't want to ruin what happens! While avoiding giving anything away, I have to wonder if the conclusion of this storyline precludes any further dramatic developments or arcs due to the way it wraps up, but I cant see this being an entirely bad thing due to the strength of all the other elements on show.

I really can't over-express how much I was pleasantly surprised by Level E. The storyline, characters and music all feel well thought out and directed towards making the show as utterly entertaining as possible, and I personally worry that this gem will fly under many people's radars. Even if the rest of the show goes downhill from here, this short 3-episode arc would serve well as its own stand-alone experience.

9
A wonderful synthesis of comedy, intrigue and originality to delight and amuse.
LATEST REVIEWS