Letter to Momo, A (Theatrical screening) 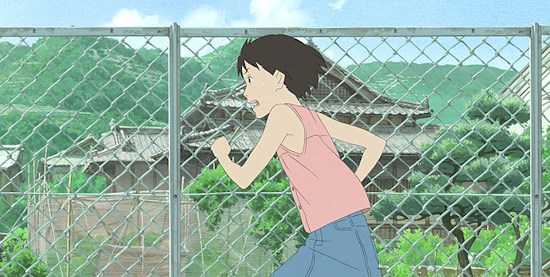 Letter to Momo, A (Theatrical screening)

The story of this Production IG movie directed by Hiroyuki Okiura is told through the eyes of Momo, a girl still recovering from the recent death of her father while finding herself dragged by her mother Ikuko from Tokyo so that they can live with Momo's grandparents on the small Japanese island of Shio.  All that Momo has personally to remember her father by is an unfinished letter from him that he never completed before his death - a letter which reads merely "Dear Momo...", and two words that hang heavily over much of the film.

On the ferry trip over to Shio, Momo is hit from the sky by what seems to be little more than three droplets of water, which she thinks never to nothing of.  These are no mere droplets however, as we come to realise when they follow Momo and Ikuko to their new home; the next thing she knows Momo is seeing strange shadows and indistinct figures around her - not exactly what she needs to complement her already difficult struggle to integrate herself into life around her new home.

When these shadows become full-blown "goblins", Momo's panic becomes fully-fledged, and made only worse when she realises that she's the only person capable of seeing the oddball trio of characters which now frequent her home.  It's only when she manages to snatch their "traveller's pass" that Momo gains the upper hand over her unwanted guests... and this is where an unforgettable period for this young girl really begins.

It's the introduction of our three goblins that really moves A Letter to Momo into a class of its own as a masterclass in hilarious slapstick comedy - its three ugly foils are endlessly entertaining as they crash around, screw up, steal and generally wreak havoc to first the consternation and then resigned amusement of Momo as she gets drawn into their scrapes.  Viewing this in a packed theatre was an absolute joy as uncontrollable laughter rang out time and again thanks to the perfect comic timing and sense of the absurd, helped along by the initially sullen Momo becoming a queen of reaction shots in the wake of her guests' behaviour.

To be honest, A Letter to Momo could have been perfectly aimed as a pure, simple comedy movie and we wouldn't have faulted it, but there is of course more to this film than simple fart jokes and slapstick.  Thus, as we enter the final third of the film everything which has been bubbling beneath the surface from the very first scene comes to the fore, causing a rift between mother and daughter which leads Momo to finally come to understand Ikuko's grief while also recounting her own pain to the viewer.

All of this leads into a final set piece where our goblin friends are torn between the rules of their particular duty and helping Momo in her time of need - a set piece which is perhaps the weakest part of the film as it stretches our suspension of disbelief arguably a little too far - before we reach a satisfying conclusion that just manages to stop short of being overly saccharine while still managing to be moving.

If you haven't guessed from these descriptions up to this point, A Letter to Momo is an absolute and undoubtable triumph - a film which blends the whimsical fantasy mindset of Studio Ghibli at its best with the nous and modern outlook of a Mamoru Hosoda movie.  This makes for a movie which is adept at telling its simple but effective story even during the midst of its hilarious physical comedy, building and growing its characters as it grows.  The only downside for a western viewer without a hefty knowledge of Japanese folklore (and in particular the folklore of the region in which the film is set) is that you occasionally get the feeling that you're missing something when it comes to some of the spirits and "youkai" presented on-screen, but this is a small quibble in the midst of much beauty.

The beauty in question also extends to the film's presentation, which easily equals if not surpasses the likes of Madhouse's work on The Girl Who Leapt Through Time while not quite hitting the dizzy heights of Studio Ghibli's output - the movie's characters are fluid with well-realised movement and facial expressions, while the island of Shio itself is beautifully depicted, only tempered by threatening to look and feel a little too sterile in its treatment at times.

Overall though, A Letter to Momo is simply outstanding - a great family movie (assuming you don't have little kids who are scared by its goblins, although it's unlikely they'd remain so for long) that might be formulaic in the way it splits its comedy and drama components at times, but one that is hugely proficient at both ends of that spectrum in spite of it.  It's hard to imagine this film becoming anything other than a much-loved classic - it certainly deserves to be remembered fondly and held in high regard, and with any luck the Japanese public will embrace it with the same warmth, smiles and laughter as those of us lucky enough to see it in Scotland have.

9
A visual feast that also provides both hilarious comedy and moments of well-developed drama to create what will surely become an anime movie classic.
LATEST REVIEWS