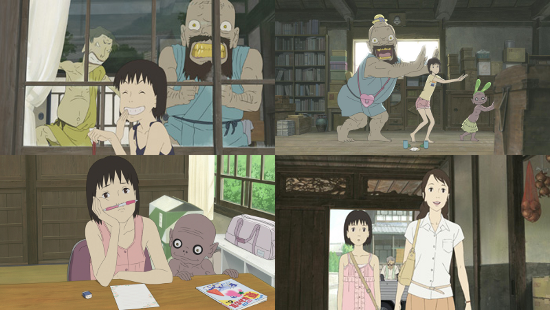 A Letter to Momo is a film I have wanted to see for a long time, but the cruel realities of timetables and geography mean it has always eluded me. Now, with a physical release I am finally able to sit down and watch it. Will this be a love letter, or a tax bill?

Following the death of her father, Momo is uprooted from life in Tokyo and travels with her mother to the tiny rural island of Shio to start life anew. Clutching an unfinished letter started by her father shortly before he unexpectedly died, Momo has a lot to get used to in her remote new home - her mother is now busy all hours of the day, she doesn’t know anyone, there is nothing to do on the island, and a trio of Yokai (“Goblins”) have taken up residence in the attic. The yokai won’t leave Momo alone for some reason, but why? And why won’t they stop stealing everything that isn’t nailed down?

A Letter to Momo is, frankly, a rather awkward film - it has a lot of individual elements that I love, but the result is less than the sum of its parts. I want to start with the positives first.

The film’s visuals are flat-out fantastic, and manages to blend two very different styles in a flawless manner. The characters (who are fantastic, but more on that later) are drawn in a very flat style with no shading present outside of shadows, with a lot of clean lines. The result is something that almost looks like rotoscoping, but with a much wider, cleaner, and simply more animated range of expression (for this review I did some research to see if the film was in fact Rotoscoped, but I can find no indication that it was). It is a great look which utterly won me over from the first minute of the film, and I fell in love with it all over again the first time Momo’s mum pulls a massive toothy grin - it communicated so much so clearly, and the sheer goofiness of it gave me a good chuckle.

The other style of art is the backgrounds, which look just stunning. The best word I can use to describe them is rich - they are bursting with detail and, perhaps more importantly, texture. No colour is flat, everything is developed and has its own visual style that fits the material. It shows this off most strongly whenever a shot moves to a wide angle close to a surface, so you can see the tiny imperfections in the surface in the foreground of the scene. This is honestly rather overwhelming at first, and is too good to to be true as there is a trade-off - the overwhelming majority of backgrounds in the film are completely static and so make scenes appear lifeless and sterile outside of the characters.

How wonderful those main characters are - while you of course have the titular Momo you also have her mum, Ikuko, who is just as and perhaps an even more of a key emotional lynchpin of the movie. They bring the movie to life with everything they do - their emotional burdens and troubles rising and falling as they both try and move on from an unexpected death, their mudding though making for a gripping journey through mundanities. Momo herself is mute for a good quarter of an hour of the film, and when she finally pipes up it is in a childish whine that is perfectly pitched and fully sells you on her and her emotional burdens. The voice cast in the film is great stuff, but Momo especially knocks it out of the park with how well she sells her emotional travails and the brattiness of her age. The rest of the cast are not quite as compelling - they feel like mechanical plot aids more than anything, readily ceding space to the main pair of characters. The trio of Yokai (who are all over the promotional art) take their sweet time appearing in the film and then spend a lot of the time being an amusing if inconvenient roadblock until the film finally decides to clue you in on their role. They feel underutilised, especially given the amount of time that they are hanging around, but they still do a damn good job as a comedic element.

The thing that spoils all of this however is that the film is too damn long.

This is not a case of there being too many plot threads or characters - all the elements presented feel necessary to the tale and its emotional impact, but each scene goes on for a little too long and this adds up to make a film that outstays its welcome. Everything is presented in a very methodical, solid fashion which means you never have to sweat the details of the plot and can instead luxuriate in the visuals and the atmosphere, but this quickly becomes irritating as the runtime of the film drags on. An hour in I checked my watch and was surprised how little had happened, but also how quickly it had passed given that I was still broadly enjoying the film. This is helped by the fact that the story is an enjoyable emotional journey that generally abstains from having a strict driving plotline until the last third of the film, where these issues start to become an imposition.

This sluggishness goes from being a minor irritation to being outright unforgivable in the final scenes of the film, as the effect on individual scenes worsens and the compounded effect becomes more and more pronounced. I found myself invested but restless for the film to start acting on all of its prior setup and character building, which it only deigned to dole out at a sluggish pace. Even after the denouement of the film there is still twelve minutes left, during which the film “ends” no less than three times, each “ending” solidly wrapping up a plotline in excruciating and dragged out detail. The first ending is still a fine way to resolve things, the second feels like overkill and closes in a way that left a bad taste in my mouth, and the third ending was just superfluous padding. The film’s dedication to very slowly showing you every single step of what it wants you to see is exhausting, and when the scene opened on the “third ending” I was screaming at my television in frustration. I was done! Emotionally satisfied and ready to leave these characters behind, but the movie had one more inconsequential plot point that it wanted to fully tie up, spending several minutes showing something that could be have been done in mere seconds to arguably greater emotional effect.

The film also consistently undercuts its own action scenes in a bizarre fashion - the few visually spectacular action scenes it has overstay their welcome, stretching themselves out to the point of inflicting boredom only to then suddenly cut and skip ahead to a shot long after the resolution. The way the initially stellar action scenes continually cheat you out of a release of tension is maddening - you go from a booming orchestra to silence instantly, leaving you hanging.

As mentioned, A Letter to Momo is a film that is less than the sum of its parts. The visuals are fantastic, I fell in love with the characters and their drama, it has some cracking (if far too long) action scenes, and its emotional heart is generally in the right place. Given all this, it is all the more a shame that I came away disliking the film due to how much it drags itself out, and in particular how torturous it was in its resolution. The film manages to squander all of the things it had going for it, which is no mean feat and a massive let down.

English and Japanese 5.1 and 2.0 audio with optional English subtitles. Extras comprise a "making-of" featurette, trailers for the film, and an art gallery.

5
A beautiful and charming film that cannot capitalise on what it has and mutates into a massive let-down.
LATEST REVIEWS