Legend of the Legendary Heroes - Eps. 1-5 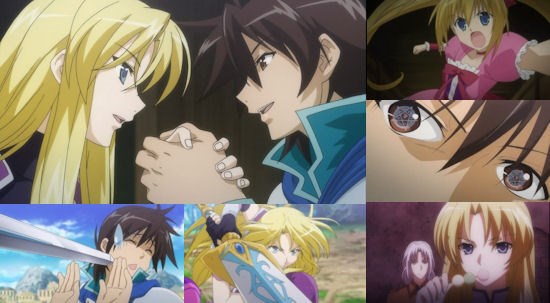 Legend of the Legendary Heroes - Eps. 1-5

In case you're wondering no, I didn't get a little crazy with copying and pasting the name of this new summer season series, for The Legend of the Legendary Heroes is indeed the name of this show derived from a series of light novels, and brought to the UK via FUNimation's streaming YouTube channel.  There can be no doubt that this outing is legendary in name, but is it similarly legendary in nature?

The series certainly wastes no time in getting down to its bare basics, introducing us to a guy named Ryner Lute with an impressive inherited ability named Alpha Stigma, which allows him to memorise and copy and duplicate magical spells he sees just once and his partner in crime, a blond beauty who goes by the name of Ferris who is no fairground attraction but rather a deadly swordstress with a bit of an obsession with rice dumplings.  This pair of unlikely allies appear to be travelling the length and breadth of the land in the search for the relics rumoured to have been left behind by the heroes of days past; a search that is always liable to land them in trouble one way or another for obvious reasons, and by the first episode we see the duo coming across some kind of huge monster before wreaking a whole lot of unplanned havoc upon the local area.

Of course, the next natural question is why they are engaged in this quest, and to answer this episodes two to four of the series shift back in time to show Ryner as a lazy, disinterested military trainee who comes across a young man named Sion Astal, a man with a decidedly grand dream of peace and happiness across the kingdom of Roland - a dream that he could well prove capable of fulfilling as we witness his rise to power while Ryner's life takes a decidedly different turn before the paths of the two characters cross again a couple of years later, culminating in Ryner's present quest of collecting those aforementioned legendary relics.

What this leaves us with is a mixture of good old-fashioned adventuring on the one hand, with a blend of action and comedy and a character dynamic that owes more than a little to the Slayers franchise, and a story of political intrigue and back-stabbing with Sion's struggle against the establishment on the other which almost has a mild Code Geass feel to it (although that could simply be the presence of voice actor Jun Fukuyama as Ryner and his magical eyes).  Unlike Slayers however, which often blends comedy and drama or violence seamlessly, The Legend of the Legendary Heroes leaves us with a rather more odd juxtaposition of the two, perhaps because of the political background of nobles versus commoners against which the whole outing is set.  When it comes to getting its hands dirty, this series has no qualms about throwing in deaths, severed limbs and decapitations aplenty to make its point, but this serious tone often renders the comedy between Ryner and Ferris out of place, even though the two admittedly take place in different locations.

At this point, The Legend of the Legendary Heroes almost feels like two series rolled into one - A good old-fashioned fantasy adventure used to fill in the gaps between the politics of a king fighting for his place on the throne and the happiness of his subjects.  If the latter side of the show grabs you then you might be left happy with all of those machinations but frustrated with the segues to a running around casting magic spells and a girl with a big sword, while others will find those light-hearted adventures infinitely more entertaining than all the lamentations from a king about his suffering populace.

Personally, I have to confess that I'd like to see rather more searching for legendary artefacts from this series, and hopefully the series will begin to deliver more of that quest now that its back story has been well and truly told.  If you're a fan of the fantasy adventure genre then The Legend of the Legendary Heroes undoubtedly does a good job of telling its story and seems to have some pretty compelling tales to share, so it could well prove to be worth checking out; be warned though, you might find yourself frustrated by the dilution of those spell-casting, sword-swinging shenanigans by other elements within the series as it threatens to bit off more than it can chew.

The Legend of the Legendary Heroes can currently be viewed in streaming form on the FUNimation YouTube channel.

7
The blend of adventure and politics doesn't always work in its favour, but you should still be able to find something to like about the series so far.
LATEST REVIEWS