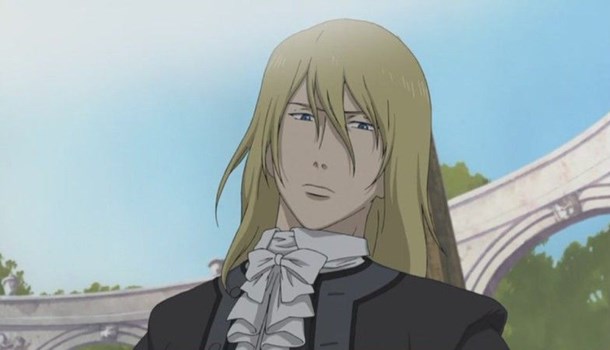 I'd heard good things about D'Eon on the grapevine, but I didn't know anything specific. Suffice to say a Japanese take on 18th Century France and it's leading historical characters was a bit of a surprise, but despite initial cynisism, it works well.

D'Eon is a  French nobleman who values the ideals of France, but is concerned that the noble elite are neglecting the citizens of his beloved nation. Our story kicks off when his sister, an agent of King Louis himself, is found floating to shore in a coffin, the word "Psalms" written upon the lid. Desperate to find out what happened to her, D'Eon begins a quest destined to take him to very dark, very supernatural places.

The most striking aspect to Le Chevalier is the attention paid to historical detail. Every street, building and cobble seems authentic. The clothing fits the period precisely and all of this comes in no way at the expense of the story itself. Unlike Otogi Zoshi, where period detail made for a dull tale, D'Eon simply uses the window dressing to frame a solid story.

Narrated by an elderly D'Eon who looks back on his story with notable regret, we learn that the spirit of Lia, D'Eon's deceased sister, is trapped between worlds in a state of unrest. When in danger, D'Eon is possessed by his sister who dispenses swift and deadly justice to her enemies. And there are many - it seems the villains of the piece are plotting using archaic magic, zombified corpses and gargoyles to accomplish their aim, which is no less than complete control of France and her territories.

The story flows well. Despite the pomp of the period, the pace is neither leaden nor dull, and we're taken to surprising places. This constant guesswork is much of what maintains your interest, and the twists and turns need to keep coming to if the series is to retain it's allure.

Voice acting is solid throughout, and it seems that ADV really have a handle on serious drama these days. Of course, the original Japanese dialogue is there for purists too.

For those with an interest in costume drama, supernatural events and political intrigue, this could well be your essential purchase of 2007.

A very detailed text-based background on the real lives of key characters which makes for fascinating reading, and 2 sets of commentaries from historians and cast on the series and the setting, also worth a listen.

8
Great pace, good plot and a great setting, all handled with aplomb.