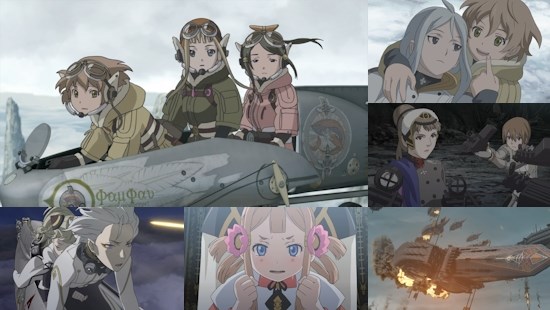 The first volume of Fam, The Silver Wing ended with a sobering (if unintentionally comical in places) look at the reality of titular character Fam's rose-tinted memories of the Grand Race - an incredible event that brought the world's populace together, but also the catalyst for the distrust and hatred between nations and peoples that still reverberates heavily through events to this day. It's an important inflection point in this world's history that we've used as a starting point for this review exactly because of the heavy weight of the Grand Race's fallout upon many of the events of the second half of the series.

We re-join the series with many of the members of this Last Exile sequel's main cast in a tight spot - Dio and Alvis are on the run from Federation assassins, while Fam, Gise and Millia are all left stranded in Russia... sorry, Glacies. In the latter case, this allows us to get a glimpse of life in Glacies and the worldview of its people (or at least its pilots), before the Federation come calling once again to provide perhaps the most spectacular aerial battle that the series has to offer.

This state of affairs leaves us perfectly placed for the climax that the series had obviously been building up to all along, setting the Federation against the rest of the world with Millia and her sister Liliana and their more personal conflict as the centre point of this struggle with the entire future of the planet at stake.

If the first half of this series was somewhat akin to a traditional adventure as the energetic Fam found herself embroiled ever-more deeply in events which could shape the world's future, the second half of Fam, the Silver Wing really shows its hand in terms of what it's really trying to say - that is, to offer its own take on the concepts of war and peace, and the impact of the former upon the latter. If the Federation's movers and shakers seemed like your standard "evil villain" in the early episodes, the episodes on show here give a very different bent to proceedings - again this is most clearly framed through Millia and Liliana's rivalry, as two characters who want the same end (that being world peace) but have chosen entirely different ways of achieving that goal.

In the midst of this physical and philosophical conflict, the series also goes to great pains to show the fallout of these differing ideas of how peace should be achieved upon the general populace - citizens are displaced from their destroyed homes or wiped out en masse, while those fighting on the front lines are sacrificed (often willingly) in the name of the ideals of their superiors. These aren't ideas that are new to anime, but they do stand out and broadly work well in the context of the series to add a darker, deeper tone to a show that could otherwise so easily have glorified its aerial conflict as little more than eye candy.

Interesting though this spin on the show's well-realised and innovative world is, we have to confess that it isn't entirely successful in the way it relates its thoughts on the issue at hand. For starters, despite these later episodes going to great pains to point out that the Federation is after peace the same as everybody else, the depiction of Luscinia in particular tends too far towards "standard anime villain" to really allow you to empathise with their take on things, and perhaps more importantly the second half of the series has a tendency to rush some of its more important moments to lend an uneven feeling to the show's pacing that reduces the impact on what should be some of its most pivotal scenes. Throw in some clumsy attempts to tie together the various factions and ideals involved (particularly in the way it reveals Fam's origins) and a recap episode for the original Last Exile series that comes way, way too late in this show's chronology and there are certainly some odd narrative choices that take some of the gloss away from Fam, the Silver Wing.

Thankfully there's still rather a lot than can be enjoyed throughout the second half of the series. Although its visuals are often inconsistent some of its aerial battles are simply spectacular, with smart use of CG ensuring that the grand scale of these pitched clashes between nations have a weight and impact to them (in both mechanical and human terms) that can be felt time and again. The show's cast also make a strong showing - Fam's energy and naive enthusiasm works well as a cipher for the audience and their involvement in the story, Millia's growth as the expectations upon her increase is notable and a number of other characters play their roles to perfection.

In other words, even if it occasionally stumbles in its delivery Fam, the Silver Wing is ultimately a decidedly entertaining series - it's a very different story from the original Last Exile beyond its base elements, but its use of those elements is certainly enjoyable and there's enough on offer here for even those unfamiliar with its predecessor to latch onto this series and enjoy its world, designs and story.

The result is a series which isn't an unequivocal success, but one that is nonetheless successful enough at what it attempts to be worth watching. Fans of the original Last Exile will rightly snap up a chance to revisit the franchise's world of vanships and aerial wonders and find a solid story to back it up, while as previously mentioned newcomers should be able to enjoy much of what Fam, the Silver Wing has to offer without that prior knowledge of the series (although you may wish to check out episode 15.5 which recaps the original Last Exile as your starting point). Gonzo's attempt to rekindle the love so many hold for the first series was never going to pass muster entirely, but this is a more than proficient job regardless - and one that often looks great on a Blu-Ray release in particular that isn't exactly lacking in extras to boot.

7
It doesn't quite manage to pull off every aspect of its grand narrative plan, but with an impressive visual scope and an entertaining, considered story there's still a lot to enjoy here.
LATEST REVIEWS