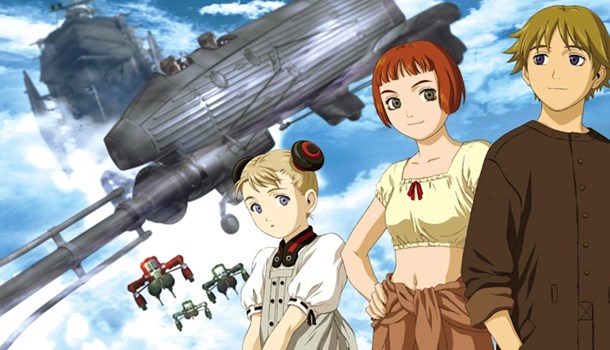 Last Exile is, quite simply, one of my favourite anime series of all time. In my mind it has 5 things that I love, and very much enjoy in an anime series. The story is absorbing and addictive, the animation is some of the best I have seen, the music works, the series is of a genre I like, and, it’s Gonzo. This doesn’t tell you very much about the series itself and to be honest; I cannot really disclose much of the story without spoiling it.

The series is set in a land called Prestel. It’s sort of partially industrialised with all modes of transport based around air travel of various forms. The two warring countries, Anatoray and Deusis, are separated by a gigantic current of wind and stormy weather called the Great Stream. Previously this current separated the two countries, keeping the peace, but water shortages and a rapidly changing climate in both countries brought them together in conflict. Hidden inside these currents are secret routes between the two countries, and with path finding help from the Guild, the war begins between the two countries. As the series progresses, the control the Guild have over the people of Prestel becomes more and more apparent.

Klaus Valca is a vanship pilot (a vanship is a small flying vessel) and his navigator is Lavie Head, they are childhood friends and after completing a mission which brings them face to face with the heat of the Anatoray/Deusis war, they intercept a fallen pilot being chased by a mysterious machine. They take the “cargo” carried by the fallen pilot and escape onboard the mighty battleship Silvana captained by Alex Row, one of the few people who know the true motive of the Guild, and the true nature of Exile.

The story continues to get deeper as relationships between the characters develop and as the conflict against the Guild approaches. Each episode adds more and more to the story and by episode 20, you will be unable to put the DVDs away.

Saying all this though, the series isn’t perfect. I did find one or two of the characters a little cold, and some aspects of the story were hard to grasp and left me with a few questions at the end of the series. The ending itself was a little anti-climactic, but was very satisfying all in all.

As I mentioned at the beginning, I LOVE the soundtrack to the series. The opening theme does grow on you, and overall, the choice of music throughout the series adds a lot to the atmosphere and does fit in with the scenes. The animation is something special. Using a process of traditional animation and CG, Gonzo have a winner with Last Exile, which proves to be stunning with the sheer quality of the animation.

My first problem with the series comes with the English dub, which, whilst very watchable, I find quite dull in places, and does not convey the emotion which is present in the Japanese dub. I do recommend watching the subtitles, but to be honest, nothing beats watching anime with the dubs on while eating your tea. ^_^ . My second problem is with the extras. In the region 1 release, the artwork box comes with a figurine of Alvis Hamilton, which sits quite nicely on my monitor. As far as I am aware (I could be wrong) the UK release will come with no such extras and the postcards, models and mouse mat that the American release enjoys will not be available in the region 2 releases. This is a great pity as these extras are some of the finest I have ever seen.

Overall, I would recommend this series to everyone I know. I will thrust the DVDs in the direction of any anime fan I may know or convert, and I am very thankful for the few who recommended this series to me just over a year ago.

Last Exile Volume 1 – First Move is available in shops now!
http://www.lastexiledvd.com/
9
If it wasn't for the cost cutting on the Region 2 release, it would be a 10