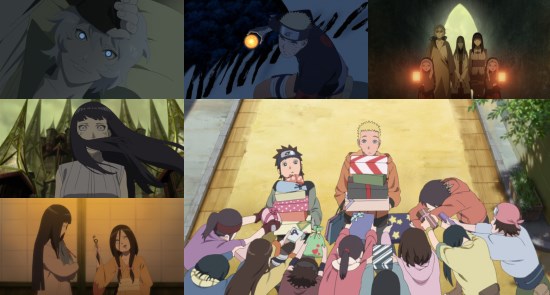 Last, The: Naruto the Movie

Before we get into the meat of what The Last: Naruto the Movie has to offer we should first note that, unfortunately, we can’t make any comments on the visuals on offer in this Manga Entertainment release. The review disc sent to us was a heavily compressed DVD-R of the movie provided by the distributor, and as such any complaints about the visual quality (which was lacklustre at best) would likely be inaccurate. We assume that the final retail release will be much better than what we received.

With that out of the way, the title of this movie makes a pretty bold statement - that this movie is in-fact the last we’ll see of Naruto. Though we now know that to be not strictly true, particularly here in the UK with Boruto: Naruto the Movie continuing the Naruto legacy and seeing screenings across the UK late last year, while the Naruto Shippuden series is a long way off being finished on these shores due to Manga Entertainment’s releases being some way behind the Japanese pace. So, The Last is not in fact the last, but does represent the end of one set of stories and eases us into the eventual shift to a new generation started in earnest by Boruto: Naruto the Movie.

The Last: Naruto the Movie also has the honour of being the first Naruto movie which is officially considered canonical, that is to say it directly continues and effects the story of the series rather than having to skirt around the series main events and wrap everything up neatly as has been the case for previous movies. Without the hamstring of series continuity to deal with, we have high hopes that The Last: Naruto the Movie will provide the best Naruto movie experience to date.

The film opens with what looks like it should be a beautiful pencil sketch type animation (see our earlier note for why “should” appears in that sentence) charting the history of the Naruto universe, which I’d love to see on Blu-ray in full HD. That leads into a flashback scene where Hinata is being bullied and Naruto comes to the rescue. Well, almost, in typical Naruto fashion it’s not the most successful of interventions, but it does set something of a tone for the rest of the film. The Last: Naruto the Movie concentrates almost entirely on Hinata and Naruto. Other characters appear, some more than others, but make no mistake that this is a film about Hinata and her feelings for Naruto, which have gone unrequited in the series to date (at least as far as the UK release is concerned).

Back in the present and we find ourselves in a post-war Konoha. In a stark contrast to his younger days Naruto is now the village hero. He finds himself so famous that he attracts autograph hunters and even a pack of groupies, something which perturbs poor shy Hinata greatly. Especially as Naruto continues to be incredibly dense when it comes to matters of the heart. But larger, potentially apocalyptic, matters begin to assert their presence forcing such matters of the heart to one side as the moon slowly drifts towards Earth. While all eyes are on the moon a mysterious group are killing and kidnapping members of the Hyuga clan, which becomes painfully apparent when Hinata’s sister Hanabi is kidnapped. Naturally a team is assembled to track down Hanabi, consisting of Naruto, Sai, Sakura, Shikamaru and Hinata.

This main storyline is the also the biggest problem with the film, it is perhaps best described as pedestrian. It does the job well enough but is certainly nothing special, and the main protagonist is easily forgettable. Really the threat only exists as a means to explore the relationship of Naruto and Hinata, and that ultimately is what the The Last is all about. The fight scenes are as you would expect in a Naruto movie, both frequent and action packed. However, that brings us to the other big problem with this film: The issue of Naruto’s power. At this point in the series chronology his abilities are quite literally the stuff of legend, and in trying to weave the other characters into the action and tone down Naruto’s power the story begins to feel a little contrived.

That said, The Last: Naruto the Movie arguably represents the best feature length outing of the franchise to date and provides an appropriate swan song for the series.

English and Japanese 5.1 audio with English subtitles. Extras consist of movie trailers, promos and commercials, an art gallery and US trailers.

7
A little pedestrian at times but nevertheless an appropriate swan song for Naruto - especially for Hinata fans.
LATEST REVIEWS