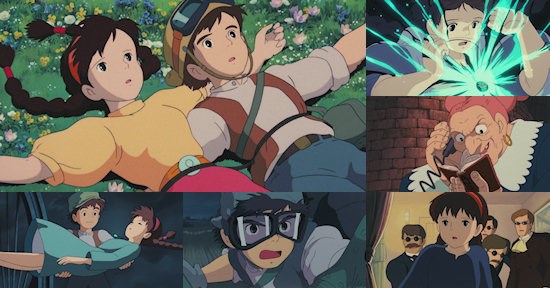 Laputa: Castle in the Sky (Blu-Ray)

After being treated to a stunning High Definition, Blu-Ray remastering of Nausicaa of the Valley of the Wind towards the tail-end of last year, the next Studio Ghibli and Hayao Miyazaki classic to get the same loving treatment is 1986's Laputa: Castle in the Sky.  Is it worth getting excited about for those who already own the film on DVD?

For those not familiar with the movie already (and amazingly it's never been reviewed here at UK Anime before), Laputa wastes no time in getting into the thick of things as we witness a young girl held against her will on board a fantastic airship - the next thing we know, she's also the object of interest to a group of pirates who forcibly board the craft and try to snatch her and (more importantly) the crystal she carries around her neck.  While trying to escape her new would-be captors the girl falls from the airship, seemingly to her death...

Meanwhile, on the ground a young miner named Pazu is witness to an unconscious young girl with a glowing crystal around her neck literally floating out of the sky - needless to say he plucks her out of the air and ensures her safety, a decision which soon throws him right into the middle of the pursuit of Sheeta (the girl in question) that sets the duo against both pirates and the army as they go on the run.  In the kind of coincidence that only ever crops up in fiction, Sheeta's past and the mysterious crystal she carries ties in to the legacy of Pazu's father, and a photograph of a legendary floating city known as Laputa which saw him ridiculed as a fraud.  As the full power of this crystal and what it represents becomes known, enemies become friends and Pazu and Sheeta's journey gains a new importance in the face of what Laputa represents to those who pursue it.

While I'm certainly not going to argue with my colleague Kevin about the all-time classic nature of Nausicaa, I am going to make a proclamation of my own here - Laputa: Castle in the Sky is a better film.  The pacing of the movie is perfect, its story stronger and more coherently formed, and its animation puts even most modern animated movies to shame with its fluid, beautifully detailed scenes throughout.  Laputa's story really allows what is now Ghibli's trademark animation style to shine, via sequences of destructive action in particular that are simply jaw-dropping while also creating sumptuous lush, green vistas or dangerous storm-clouded skies with an equally effortless feel.

It probably goes without saying that this ground-up remastering for the film's Blu-Ray release makes the movie even more of a visual treat, but I'll say it anyway - Laputa in High Definition is beautiful.  I could probably pick nits in one or two shots that look a little grainy, but in general terms watching the movie in full 1080p resolution is a simply spectacular experience that gives the film a new lease of life in its own right and adds an additional layer of appreciation to the pain-staking detail afforded Laputa's animation.  Even if you've never seen the film before you'll be taken aback by just how good it looks considering its mid-1980s heritage.

Thankfully, the audio side of the release is no slouch either, with a Japanese audio track that's powerful when required but equally subtle when it needs to be right down to its memorable musical accompaniments.  The only area where Laputa is open to some criticism is with regards to its English dub, which is a hit and miss affair that certainly doesn't live up to the standards set by Nausicaa - in my book, the Japanese audio is by far preferable on this occasion.  As with Nausicaa's release, there are plenty of extras to find within Laputa's Blu-Ray release, from an interview with Hayao Miyazaki through to storyboards, voice actor interviews and so on - there's certainly no shortage of additional information for the die-hard fans to soak up here.

Much like Nausicaa last year, Laputa: Castle in the Sky is a classic and a must-watch Blu-Ray release for anyone with the capabilities to do so - indeed, given that this release also features the film on DVD you have no excuse not to at least consider picking up a copy if you don't own it already.  If you want to see Studio Ghibli at their best in terms of both animation and story telling, this Blu-Ray is absolutely deserving of a place in your home as a perfect testament to a beautiful work.

'Double Play Edition' includes the movie on both DVD and Blu-Ray - the Blu-Ray edition consists of English and Japanese 5.1 audio with English subtitles.  Extras for the release are relatively comprehensive, and consist of:

9
A stunning High Definition remaster of a fantastic work of animation - an absolute must buy.
LATEST REVIEWS
Girls' Last Tour