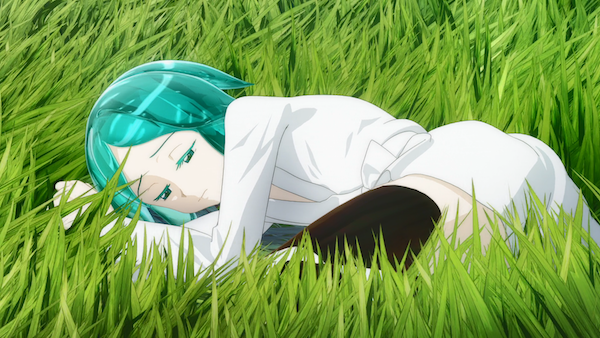 Land of the Lustrous is a tale of a time beyond humanity, where the only humanoid life is that of jewels - different mineral types of varying hardness that live together with a monk-like father figure called Master Kongo.

The peaceful life of these creatures is regularly interrupted by a species known as Lunarians (moon-people) who visit the land attempting to steal the Lustrous for their value as gemstones.

The series is certainly unique in terms of it's ideas and scope, with the Lustrous in particular being genderless (as minerals of course would be) though mostly feminine in design. As such there's no romantic element in the show, instead relying on friendship and comradery between the main characters to act as the emotional core. For the anime, things have been moved around a little to make Phos (short for Phosphophyllite) the main protagonist. As the character with the lowest hardness rating among minerals, they are kept away from combat, but as the show moves on, their unique circumstances bring them into contact with the Lunarians. Phos' growth is a result of their interactions with peers such as Cinnabar (who is even lower on the Mohs scale than Phos, but due to poisons in her body is confined to the night watch) and the intimidating Bort, who is the hardest of the Lustrous and their best combat operative. There are many other characters who have their own duties, and throughout the course of the season you get a good feel for who they are and how their interactions with Phos changes them.

The best way I can describe Land of the Lustrous is as a mood piece. The pacing is glacial and sombre for the most part, and as such it reminds me in tone of Haibane Renmei. In this at least the show is likely to be somewhat divisive (though generally it receives favourable reviews) between those who can lose themselves in the world as presented, and those that become impatient waiting for the plot to progress across the 12 episodes.

It helps that the presentation is absolutely pin-sharp. It's a CG anime that surpasses many of its peers in sheer quality. The show creates its own style, helped by the shimmering hair that reflects the mineral of each character, and the stunning environments created for this new world. If you're heavily into visuals, you'll find enough here to keep your attention.

The Lunarians are an odd threat - looking like buddhist statues with surreal weaponry, they lack character or motivation for much of the show's runtime. They turn up, faceless and silent, do their thing and then are either dispatched or leave. After the first few episodes this gets a bit repetitive, even if the nature of the attacks evolves. Essentially, they're a bit of a dull villain.

The show ends very abruptly, leaving plenty of unresolved issues to contend with. There's been no word of a season 2 at this stage, but I wouldn't rule it out given how popular the show has been on streaming platforms. Hopefully it won't suffer the same issues as Fruits Basket did when the original anime only covered the first half of the manga! (Rectified now of course by a brand new show).

The show's strengths are the unusual premise, the character interactions and the sheer breadth of imagination on show - the idea of "other" sentient life has rarely been tackled with such variety, and it's the hook on which the show thrives.  Action junkies will find some admirable battles, but such is the glacial nature of the show, it might be a difficult watch for some.

I found my enthusiasm for the show waning somewhat toward the end, despite the solid characterisation and unusual ideas. The Lunarians aren't a particularly interesting threat, but I'm sure that will be resolved as the story moves forward. The mystery of Kongo is intriguing, but so little is resolved by the end of the series that I found the show a touch frustrating - the JJ Abrams Mystery Box problem writ large.

Overall, I'd recommend a watch - it has much to recommend it beyond the stunning visuals, but be prepared for little resolution beyond some touching character moments.

8
A slice-of-weird-life anime that drags its feet from time to time, but offers something genuinely different.
COMMENT AND DISCUSS
blog comments powered by Disqus