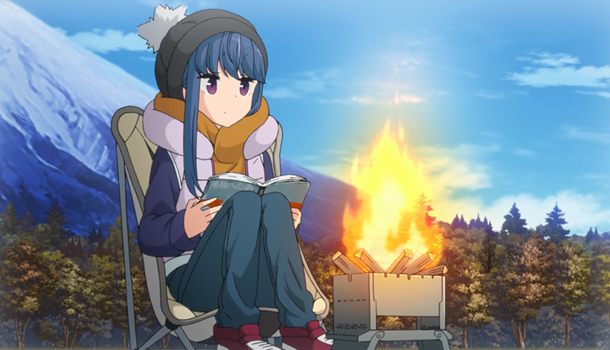 I have a rather chequered history when it comes to camping; it is very much a love/hate relationship. Let me tell you a story: I was a cub, and subsquently a scout, from the age of 9 up to 15. It helped me learn how to socialise, drink and make epically huge stews with dumplings the size of your head. I loved camping back then, it was fun. Unfortunately, as I grew older, I ended up having more bad experiences than good, from the dog sick in the tent in France, to the hypothermia after sleeping in a tent in Aberdeen with my flatulent boss. Long story short, I haven’t gone camping since.

However, after watching the final episode of Laid Back Camp on Crunchyroll I found myself looking at trangia stoves, twinwall popup tents, insulating ground sheets and comfy camping seats, which I could rock on the back of my bicycle. Then I remembered that I am going on 34, I am creaky, I have a comfy house with cats, and I could solo camp in my lounge... (I have solo-camped in your lounge - it's comfy - Ed)

Laid Back Camp is exactly what the name implies: it is a stress free, comfortable and rather educational series (there are a lot of them this season). Based on the manga Yuru Camp, which has been licensed in the Western world, the anime follows the antics of five high school girls who just happen to have surnames named after cities in Japan.

The first of the girls is Rin Shima. She is a quiet loner (at least at first) and likes to go camping on her own in the middle of winter. She likes winter as there is nobody else about on the camp sites, meaning that they are nice and chilled (literally and metaphorically). Rin, or Shimarin to her friends, is a camping professional due to the influences of her grandfather. She has all the best camping kit and the way she can just chill out in the cold, hot drinks and food in hand, reading her book, makes me just a little bit happy. Rin’s solitude however doesn’t last long, as she meets the energetic Nadeshiko Kagamihara, after finding her asleep and shivering at a bus stop. Taking Nadeshiko into her tent, to save her from freezing to death, Rin feeds her a nice cup of ramen noodles and suddenly Rin finds herself befriended and Nadeshiko begins to fall in love with camping. If only Rin’s other friend Ena - who loves warm places, her bed, and her Chihuahua - would come camping as well.

When they return to school, Nadeshiko discovers that there is a Outdoor Activities Club and meets the enigmatic Chiaki and the busty Aoi, the only two members of the club. She begins to learn some of the techniques and tactics which are key to surviving in the wilds and also makes some new friends, who are also keen on camping. The friendship grows through the series, culminating in the Christmas Camp which is perhaps the most adorable and chilled camping scene ever seen on screen.

This season Laid Back Camp has been the saccharine and relaxing series which I have used, with copious quantities of gin, to chill out at the end of a hard week. The series has been called many things, but its scenes of sheer unadulterated comfort have made it stand out from the crowd. There is nothing as wonderful as being curled up in bed watching the Laid Back Camp girls doing the same on a cold camp site, in their sleeping bags and blankets. Comfy, that’s what Laid Back Camp is. The series also has its incredibly fun segments as well, from Rin’s meeting with the dogs on one site, to Nadeshiko’s adult fantasy, the series offers many such moments.

The series also offers good camping advice all the way through, from buying tents, ground sheets, stoves, and chairs to finding a good site. It’s really educational and you never know, it might actually get some of us into the great outdoors!

I will comment also on the opening song, as it is perhaps the most catchy of the season. From the opening animation which changes each episode, to the toe tapping happiness that is the song itself: “Shiny Days” by Asaka delivers. It’s just the best and is now my new alarm call, replacing the usual Macross Delta songs.

Laid Back Camp is one of those shows which you may never think take a second look at based solely on the synopsis. I dived into it on a whim, only to became enthralled and addicted to its relaxed storytelling and characters. I came to rely on it through the season, as work became insane Laid Back Camp offered me a comforting escape. Now the series is over I actually feel a strong sense of loss. Laid Back Camp was one of my series of the Winter 2018 season, and I strongly recommend you check it out.

9
Laid Back Camp is super comforting and relaxing viewing.