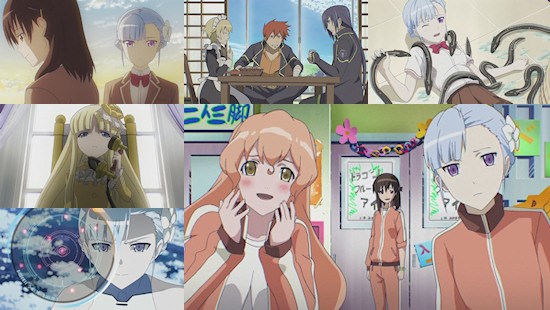 The first half of Lagrange - The Flower of Rin-ne was an interesting affair - one part mecha action series to two parts slice of life high school anime.  It's a mixture of seemingly polar opposite concepts that probably shouldn't work together, but somehow succeeded in what they were trying to achieve like some kind of ice cream that should make you vomit but ends up being delicious.

Against that backdrop, little really changes for the second half of the series - even with the threat of some kind of alien invasion, and the potentially apocalyptic power which protagonist Madoka is rumoured to carry as the pilot of her Vox Aura, Lagrange still manages to find time to have fun with some eels in a swimming pool (no need for me to extrapolate how that ends up), or to follow the temporarily grounded members of Villagiulio's Kiss group as they set out on a mission which is derailed by their inability to use the Japanese train system or distinguish blending in with the natives against acting like the star of a cheesy samurai film.

Even when the show's giant robots do take to the screen, most notably in the climatic battle which draws a line under much of the first half of the series (and yes, there is a second season to come in the summer), the focus is still upon Lagrange's trio of Vox pilots rather than the mecha or action themselves - it's the friendship and occasionally confused emotional states of Madoka, Lan and Muginami which become a pivotal part of everything that we see across these episodes.  Thankfully, the relationship between these characters is satisfying and, when required, suitably complex and believable, giving a human touch to the series aside that delivers emotionally above and beyond its excursions into comedy.

If there's one criticism to be made of this first half of Lagrange as a whole, it's that its wider plot doesn't really go anywhere in particular - come the end of the series up to this point, nothing much has changed from where we were at the start beyond some intergalactic politics that never felt as intense, dangerous or otherwise threatening to life on Earth as they were perhaps meant to.  Certainly, if you're after a serious story of interstellar conflict then The Flower of Rin-ne is not really the place to go, as it largely serves as a backdrop to and enabler of the story of Madoka and her friends rather than the primary driver of the show's story.

On the other hand, if you're looking for a show with a little action and the odd giant robot that isn't too heavy, then you might just have found yourself a keeper here - the series is inordinately fun for the most part, and as we mentioned in our review of the earlier episodes of the series Madoka alone is frequently worth the price of entry on her own, ball of hilarious and forthright energy that she is.  Throw in a supporting cast which bring out the best in her personality, and Lagrange proves more than capable of eliciting the odd belly laugh from when it sharpens its comedy knives.

Whether Lagrange - The Flower of Rin-ne is the kind of series you'd want to watch more than once is, perhaps, a tricky question, but as a one-off slice of streaming entertainment (and in the hopeful assumption that its follow-up series will also stream this summer to hopefully take it in some new directions) what we have here is a genuinely entertaining show.  It's colourful character designs, entertaining personalities which inhabit them and occasionally gorgeous visuals all serve to bolster a show which might be an absolute mish-mash of conflicting elements, but one that nonetheless rises above its idiosyncrasies to leave you with a smile on your face and a bit of a warm, fuzzy feeling in your heart.

7
It's an odd blend of mecha action, space politics and slice of life school shenanigans, but this series is greater than the sum of its parts when it comes to entertaining the viewer - just don't expect anything too strait-laced or serious from it.
LATEST REVIEWS