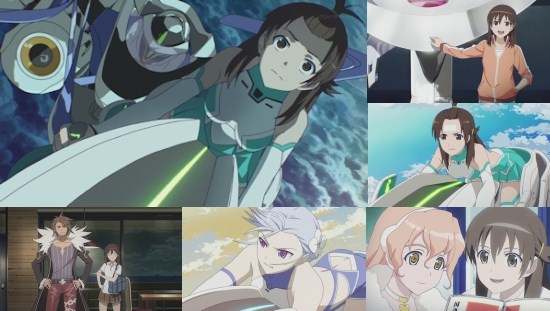 We're probably all familiar with the archetypical sporty and energetic anime girl - someone proficient in any sport or activity with little to no effort required on their part.  What we perhaps haven't seen before is for such a character to make a one-woman school club out of her unique abilities.  Enter Madoka Kyouno, sole member of her school's so-called "Jersey Club", dedicated to helping all and sundry with whatever they need.

Although watching this incredibly enthusiastic girl racing around various other school clubs to lend her skills to their every need might make for an entertaining series in its own right, Madoka's life is about to be changed markedly via an encounter with Fin E Ld Si Laffinty - or Lan, for short.  This mysterious, otherworldly girl soon introduces Madoka to what appears to be her destiny, mapped out by a chance incident a decade previously - she's been selected as a pilot of a Vox Aura, a mechanised jet-cum-robot fashioned using alien technology.  Before she knows it, Madoka is thrust right into the midst of a conflict - both for possession of the Vox Aura craft held on Earth, and perhaps even for the future of the planet itself.

As you might be able to gather from that plot synopsis, the basic concept of Lagrange - The Flower of Rin-ne is pretty typical mecha fare, with shades of Evangelion, Rahxephon, Eureka Seven and countless other shows you could name check.  It's probably also fair to say that, judging by the first half of the series, Lagrange isn't going to be troubling any of those much-loved shows in terms of popularity.

However, to dismiss the series based on that alone would actually be rather unfair, as Lagrange still has rather a lot to offer in its own quirky and flawed way.  After a frankly terrible first episode that tries to draw in viewers with brazen fan service and suggestive content over anything more substantial, the series soon settles down into something far more entertaining.  Madoka herself is a fantastic lead character - charmingly, lovably bonkers as she charges into everything from school clubs to mechanised fights to the death with the same kind of thoughtless but heartfelt enthusiasm that you can't help but warm to.  This is backed up and fleshed out as the series progresses courtesy of her shifting relationships with both Lan and another girl, Muginami; it's this trio and the events that transpire between them which look set to be a cornerstone of the show's second half.

Away from its characters, we get to the real heart of Lagrange's quirkiness.  On the one hand, the series seems to have set up some serious and complex intergalactic politics within its realm, although there's little real effort to explain this even at the half-way point of the series, with some decidedly fluid definitions of who are the good guys or if there even are any good guys as various factions work to their own benefits against a backdrop which suggests that formerly close comrades have been torn asunder in the recent past.  Despite this, on the other hand there's never any real "weight" to any conflict within the series - there's no feeling of intent to any destruction caused or threat to human life, and the series is more than happy to twist otherwise serious scenes around in the name of comedy to get a laugh, suggesting that what we have here is a series that doesn't take itself too seriously.

This juxtaposition of elements makes The Flower of Rin-ne quite the curio - a mecha series with slick, curvy and actually pretty sexy designs by Nissan, set in and part-funded by the city of Kamogawa (because nothing promotes tourism like seeing a location get battered by alien invasion) and trying to blend comedy and action via a seemingly complex backdrop that often steps aside to make way for slapstick and gags.  It really shouldn't work, and I have no doubt it'll both frustrate and irritate the mecha purists, but there's something rather irresistible about Lagrange, if only thanks to the way the simplistic but enigmatic Madoka carries every single scene she's in - the writers seem to know this too, and ensure that their leading lady eats up every second of screen time she possible can as we finally start to get a grasp on her importance in the grand scheme of things once we hit the mid-season cliff-hanger.

The entertainment value of the series is backed up to a decent degree by its production values - those aforementioned curvy mecha are backed up by some great character designs, and animation which won't set the world on fire but proves to be more than adequate for the action and more mundane elements of the series thus far.  The delicious cherry on the show's cake is its soundtrack - even glossing over the wonderful Megumi Nakajima's provision of fantastic opening and ending themes, Lagrange's background music is a delight that shifts from the orchestral to the electronic as the situation demands, with the latter in particular adding to the show's action scenes immeasurably.

There's no doubt that Lagrange - The Flower of Rin-ne won't impress everybody, with its relatively slow-paced mecha action and the way it goes about its story-telling business. Unfortunately its opening episode isn't a particularly good indicator of what the series is capable of either, meaning that you'll have to invest watching at least the first two or three episodes to give it a decent crack of the whip.  By that point, you might just have found yourself cheering on Madoka as she stomps around trying to make the world a better place singlehandedly.  We might not be able to use her catchphrase, "Maru!" (or "Perfect!"), to describe this series, but there's a fair amount of entertainment to be had from Madoka's adventures.

7
A well-presented and often entertaining series whose intentions thus far are hard to pin down.
LATEST REVIEWS