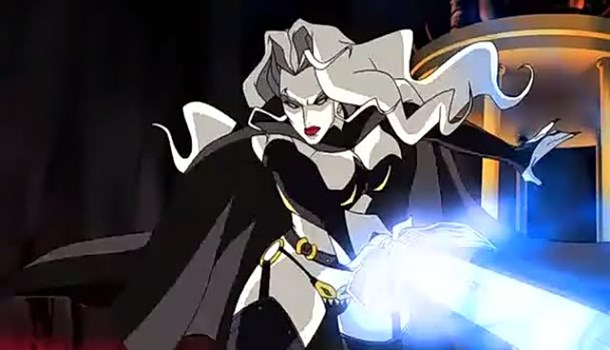 Lets get one thing straight before we kick start this review. I’m all for new ideas. Hell, industries need new ideas otherwise the same crap gets recycled over and over again until it becomes an ugly, unrecognisable lump that not even a mother could love. For an industry to survive, new ideas have to be created and put into effect. I give a thumbs up to ADV Films for trying their hand at film creation and filming their first “anime”. But seriously, did they read the script or watch the film before manufacturing started?

Well…lets get this started then. Your mother gets knocked up by Satan himself, Satan is daddy for a while and has war ranging for a while. The local village people (not the band) are annoyed, go to stop him, Daddy Satan does a runner and the daughter called Hope (no really) is burned at the stake for being in league with the devil. Sucks to be her. Well, after a lot of burning, god calling and this and that, Hope ends up in hell more than a little annoyed at Daddy and decides to wage war. Woooo.

I’m sorry to say, while the above could sound hopeful, Lady Death is very very much a case of “should of looked at it half way through and asked if it was worth carrying on.” It may have been a good idea on paper, but in pretty much every department the film is quite sub-par. In fact, the only thing that I liked was the music score. Something that actually fit in with the action and the world that the film is based in. It's not going to win any awards, but it’s a nice and only plus for this film.

I could go on and on about this film, stating what was wrong with it; like the below average animation, cheesy script, boring characters and for just having a guy called Cremator. Not THE Cremator, just Cremator, as if it was an every day name. The plot just seems to have everything tie together nicely. A few sparring seasons and Hope, a once normal Swedish girl gets white hair, bigger breasts and the hankering to wear a leather thong. Need an army to attack the lord of darkness, what’s that knocking at the door? Its an army ready to die for her. If only conquest was actually this easy, I could rule the world with an iron fist.

But I degress. There was a huge amount of potential for ADV to have their first feature film production to show they could be a powerhouse. But alas, Lady Death reminded me of a gorier version of Masters of the Universe, especially with the Hell background. I was actually hoping Skeletor would appear and do his camp evil cackle, just to liven things up a bit. I hope that ADV have learned from this and make some leaps and bounds to improve in all departments before the next release.