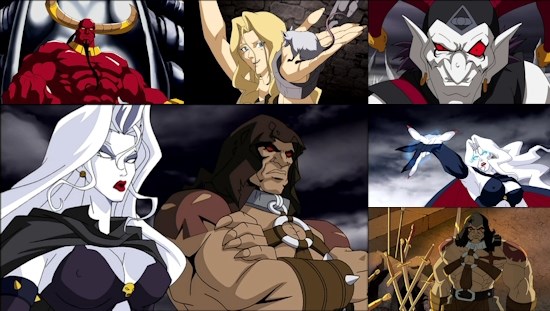 While licensing and releasing anime for western consumption is all well and good, a number of companies involved in such a task find themselves hankering to be more directly involved in the creative process at some point in time. Although Manga Entertainment went the whole hog and put funding into the original Ghost in the Shell, the past decade or so has seen a couple of US distributors take the plunge with their own productions or co-productions - we've seen FUNimation Entertainment work on co-productions around Dragon Age and Mass Effect, and many years prior to that ADV Films took the plunge with their own production of Lady Death.

It's this outing that we're here to talk about today, courtesy of 101 Films' DVD re-release of what proved to be a one-off project for the ultimately doomed ADV - with a screenplay by Carl Macek of Robotech fame and a comic franchise to work from, did this production live up to its lofty ambitions? Allow me to spoil any tension inherent in the remainder of this review by saying an unequivocal "no".

Starting out with a glimpse of the show's titular character (you should probably accentuate the "tit" part of that sentence for comic effect given said character's garb) as she sets herself up to face off against none other than Lucifer himself, we then rewind to the back story of this entire affair. In short, Lady Death begins her life as the meek and devout Hope, only to find that her father is in fact the devil incarnate - once he leaves the scene to return to Hell, taking Hope's boyfriend and mother with him, Hope herself is left behind to be burned at the stake as a witch. Her only hope is to call upon her father to save her from death by transferring her to Hell (although as a devoutly religious girl, surely a standard death would have seen her go to Heaven?), only to recoil in disgust as her dad's choice of decor... or the fact that he's a megalomaniacal evil ruler over his land, I forget which.

Cast aside by her father, Hope becomes Lady Death - I don't know why so please don't ask - and meets Cremator, an unemployed baddie from He-Man who was also fired from his job as the forger of weapons for Lucifer after trying to attack his boss, which is a disciplinary matter even in Hell it seems. Thus, the two hatch a plan for vengeance and to topple Lucifer from his throne, amassing an army and enjoying a training montage where Lady Death learns how to magically turn whatever she's wearing into a skimpy thong because finding a good laundrette in Hell is... well, hell. Can Lady Death and her masses defeat Lucifer before the film's £1.20 animation budget runs out? Can she rescue her boyfriend from Dad's outdated castle and take him to IKEA before the sales end? Am I just making up plot points because it's more interesting than the actual narrative of the film?

Let's put this bluntly - Lady Death is bad in many, many ways. Although the core of the script is at least on solid (if unspectacular ground), its delivery is entirely subpar. The film's dialogue in particular is terrible, with every line coming with a serving of cheese and read with all the passion of a sloth on sleeping tablets almost entirely without exception; I can only assume that the script writer's apostrophe key was broken, as every "it's" becomes "it is" and every "don't" is a "do not" without fail, leading to stiff and stilted dialogue that is beyond compare.

Visually, the film looks fantastic - if your idea of fantastic is a twelve year-old who loves breasts, blood and fantasy making a half-decent Flash animation. Had the movie (minus the blood and breasts) been a 1980s Saturday morning cartoon I admit that my five year-old self would probably have lapped it up, but as a 21st century animation production it looks cheap, dated and tacky. When you see a horse trotting along yet moving in a perfectly straight line without any up or down undulations like a car, you know you're in for a treat.

Although I've noted that the film's script is solid, so is the bottom of my kitchen sink and I wouldn't particularly want to watch that for over an hour either - the over-arching plot of the film is mind-numbingly tedious and predictable almost without exception, and coupled with the aforementioned script and visuals it only serves to strangle any moments of interest that might otherwise have sprang forth entirely.

In other words, this is not a film that should be watched with a straight face or any intention of enjoying it "as is" - sit down with a few of your snarkiest, wittiest friends, ply them with beers and provide a Mystery Science Theatre 3000-esque commentary and suddenly the entire endeavour becomes more entertaining.

Perhaps the ultimate ignominy served to the film is this DVD re-release, which doesn't even contain an English language menu option and thus serves up all of its menus in German, complete with a German anti-piracy video to kick things off ("Nur Original ist Legal" being the German equivalent of "Don't Copy That Floppy", I suppose). Admittedly this menu isn't too tough to navigate (although I do have an A-Level in German), but it still feels sloppy even if we suspect it's a decision made to excise some English bonus features to which 101 Films didn't have the rights. That aside, the film's audio and video quality is pretty reasonable, allowing you to enjoy the movie in all it's... ahem, "glory". Needless to say, there's no Japanese audio track here as the movie was created purely for western audiences.

So, put simply, Lady Death really isn't any good - if you enjoy picking up DVDs of bad movies just so that you can mercilessly poke fun at them then there's some entertainment value to be found here, but beyond that this is a film is a chapter in the history of western anime distributors that is best forgotten.

English and German audio with German subtitles.  Extras consist of a "Visions of Hell" feature and "Animated Death" making of feature

2
A terrible film, badly animated and served up on a DVD with German menus - best served with copious amounts of alcohol and an eye for inadvertent comedy.
LATEST REVIEWS