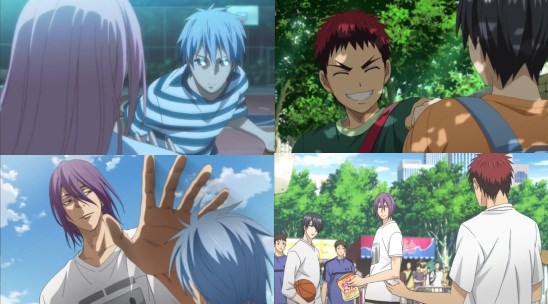 Last year, Kuroko’s Basketball turned out to be a pleasant if totally average sports drama - it ticked all the required boxes but was never anything really special on its own. What’s really kept the series in the spotlight however (alongside its rabid female fan base) has been the high profile activity of a fan (or fans) of Slam Dunk, a rival basketball manga series, who have taken obsessive fandom to a whole new level through issuing threats of a terrorist nature against pretty much anything related to Kuroko’s Basketball.  This includes sending suspicious chemicals to a variety of events organisers which resulted in pretty much every Kuroko’s Basketball event being cancelled, while even large scale events like Comiket have issued requests for people not to bring related products along in fears of a more deadly response. Though utterly despicable, these actions have made sure the series has remained at the forefront of people’s memories. Now that season two has started though, can the new arc justify everything that led up to it?

Picking up pretty much immediately after the close of series one (the episode numbers even follow on) the team aren’t exactly distraught after their crushing defeat in the summer tournament. Instead they’re firing on all cylinders as the winter tournament kicks off with our heroes yet again the underdogs of the event (why this is the case isn’t particularly clear after their huge successes in season one). All focus is instead upon the Generation of Miracle's former members, two of whom are finally introduced into the series (albeit in a small way) over these first three episodes. But I’m skipping all the way to episode three here, as first we have two episodes of character-centric filler to tide us over as the gang play a street basketball tournament (pretty much entirely off-camera) and train themselves for the upcoming season.

It’s difficult to find something new to say about Kuroko’s Basketball that I haven’t already said, as it really is just a continuation of the series with no real changes bar the music which opens and closes the episodes. Of the new characters on show only Murasakibara of the Generation of Miracles really stands out from the crowd with his amusing and quickly changing personality from goofball to deadly serious. Whilst the existing characters did develop and become more individualised over the course of season one, when revisiting them for season two after the break between the two it’s clear that they’re still very bland and, aside from Kuroko and Kagami, the majority of the Seiren team don’t really have much to give bar being additional bodies to fill shots and make sure there are enough players on the court. Yes, some of them like the team captain do get moments to shine but afterwards they quickly drop into the background whilst we wait for our leading pair to astonish us with unparalleled feats of physical skill and ball control. It’s almost criminal in fact that all of the best characters are relegated to side roles – characters like Kise and Midorima from the rival teams were brilliant last year but like then, they are pushed to the background here and just pop up occasionally for a quick gag, while the show's only two female characters suffer the same fate. Obviously in this kind of series the focus has to be on the main team, but they really need to be able to make more of the rest of the characters if they want to elevate this above the other sports show around, particularly when other sports-style shows focusing on less action-oriented fare such as Saki are topping them on characters and action!

At the end of the day, if you liked the first series you’ll like this one - it’s doing a reasonable job of continuing the story, it looks the same, has the same cast eand so on. If you were in the market for more games with Kuroko and friends then you are truly in luck because it’s all righthere.

Admittedly I’m coming off as being a bit down on the show, which may be a little misleading as I do intend to continue watching if only to see the inevitable victory at the end of it all, but sadly three episodes in there is nothing to make the second season stand out at all. If you weren’t a fan of season one then this certainly won’t change your opinion and Crunchyroll are streaming a number of other sports series which may well suit you better.