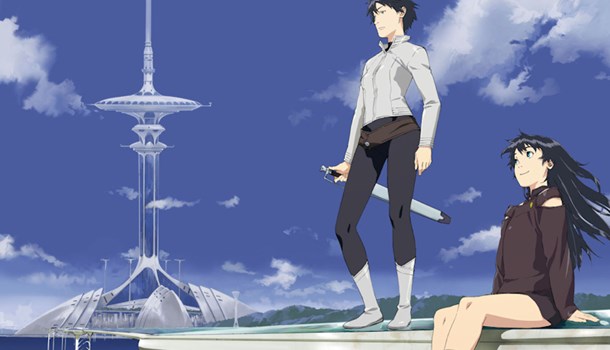 Like all great Sci Fi, Kurau Phantom Memory begins with a scientific experiment gone wrong. In a search for new sources of power, an experiment on the moon with a substance called Rynax goes awry, and in the aftermath a young Kurau is infused with raw Rynax energy, and becomes something... not human.

Cut to 10 years later and Kurau lives on Earth, a mercenary agent capable of uncovering the most closely guarded secret or stealing any object, no matter how heavily guarded. But her life takes a strange turn, when a second Rynax arrives from within Kurau. Her "younger sister" is an adorable character, and Kurau names her Christmas. But the net is closing and now Kurau has to defend herself and her new sister from the authorities.

From the creators of Rahxephon and Full Metal Alchemist, Kurau has much to live up to, and it doesn't disappoint. The designs are more Westernised than usual, putting me in mind of Ghost in the Shell. The excellent futuristic action sequences and sombre mood reinforce the comparison, but Kurau ditches the technobabble for a more straightforward story, and end each episode on a cliffhanger that had me begging for another episode.

In fact, the writing is Kurau's strength. Well paced, beautifully plotted and careful to keep its secrets, the series is quite affecting. Also of note is the brilliant vocal work, and the dub is a pleasure to watch.

The animation and music are so-so, but that doesn't matter. Kurau doesn't need flashy visuals to keep your attention, the immersive storyline does that on its own.