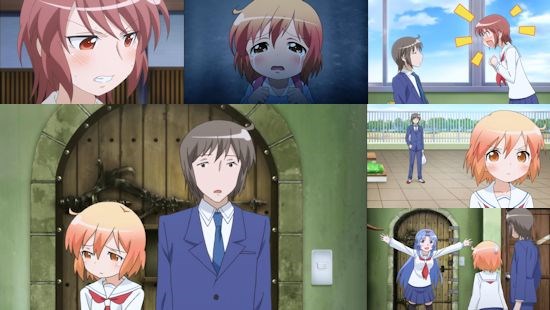 Exploring the downsides of having some kind of "superpower" has long been the staple of comics and movies - but have they ever been the focus of a romantic comedy anime? Enter Kotoura-san into the equation.

Although I call this series a romantic comedy, you'd be hard-pressed to believe it from watching the first episode, which is one of the most depressing things I think I've ever watched. This opener takes us on a whistle-stop tour of the life to date of our protagonist, Haruka Kotoura - a cute kid who has an unerring knack for reading what people are thinking or feeling. As time goes on, it becomes clear that this isn't some kind of uncanny knack for understanding the human condition, but rather the fact that Kotoura is capable of (and is unable to prevent herself from) reading people's minds. As a young girl with no understanding of the perils of this ability, she finds herself losing everything around her - first friends, then her own parents, leaving her alone and completely isolated from the world. After deciding to transfer schools, Kotoura is all ready for more years of lonely hardship ahead of her - until she means Manabe, a boy so dense that his mind is a blissful oasis of silence to Haruka's senses.

Not only is Manabe's blissful lack of internal thought processes (aside from the dirty thoughts that often pop into his head - hey, he is a teenaged male after all!) the perfect foil for Kotoura's ability, it actually seems that Manabe rather likes Haruka to boot. Thus, the pair soon strikes up a close friendship, and even extends this circle of friends thanks to (of all things) the after-school ESP society, who naturally take an interest in Kotoura's "power". Of course, it isn't all smooth sailing for Haruka just because she's made a single friend, and thus bullying and her ostracisation from those around us continues to be a major issue, particularly given that she has a rival for Manabe's affections.

I have to be straight with you here, dear readers - I still really don't know what to make of Kotoura-san. Having been greeted with its slightly odd-looking but cutesy-feeling character designs, I really wasn't ready for an episode that... well, that made me hate humanity so much. To be honest, twenty minutes of watching all and sundry dump upon Haruka as a child is genuinely horrible to watch, and were it not for reviewing this series and the determination to "do my job" that comes from that I would have turned off the stream in the midst of that episode. Part of me feels like I should be commending Kotoura-san for putting such a brave and cynical spin on its main premise, but at the same time I can't really get behind a series that lays on that cynicism so thickly.

It's this issue that rears its head time and again throughout these first three episode - moments of comedy and levity are outweighed by the immense presence of those darker elements. Every character beyond its main cast members are horrible human beings to a man (and woman), and it's soul-destroying to watch the cheerful leads having their fun and relationships destroyed over and over. Even what seems like a sweet ending to the third episode (and effectively the first story arc of the series) is turned into something depressing. In short, it's like moe Eastenders.

This feeling of relentless helplessness might have been assuaged had Kotoura's comedy elements been a little sharper, but unfortunately it soon falls into a predictable rut in terms of the jokes it manages to produce from its situation, which largely falls into "Manabe thinks of something perverted, then Haruka gets flustered about it". The series also plays fast and loose with Kotoura's ability - despite being able to read anyone's minds via a power that has no off switch, we only occasionally see her actually reacting to what people are thinking when the plot demands it; a necessary device for the show to work, but still one that feels jarring if you start thinking about it too hard.

In fairness, the biggest positive of the show is in the wider relationship between Manabe and Haruka, who actually make for a rather sweet couple in spite of the repetitive humour, and you can't help but root for them throughout. The trouble is, even this makes the drama that accompanies the show feel more malicious and heavy-handed as it goes about picking on said couple.

I don't think I've ever vacillated so wildly in my opinions on a series while watching it, and to be frank I've been sat here wrestling with my opinions on how to discuss and score it from viewing the first episode onwards - this might just have to be the kind of series that you try for yourself to really gauge whether it's for you or not. Having slept on it though I came to realise that, despite its brave goals, at no point did I find myself actually enjoying Kotoura-san, such is its depressing worldview and its determination to ruin any rays of sunshine that might fall upon its characters. Even stripping away the lacklustre comedy elements of the show and the weird disconnect between those elements and the dramatic side of the show, watching a girl getting dumped into the proverbial gutter of the world relentlessly is neither fun nor thought-provoking to watch - I'm all for taking a trip to the darker side of life, but there comes a point where it weighs so heavily upon the events it depicts that it crushes all life out of it. Your mileage will certainly vary, but if you're looking for something to cheer you up after a long day, Kotoura-san is absolutely not it.

You can currently watch Kotoura-san in streaming form on Crunchyroll.

4
If Eastenders were an anime, this would probably be it. Some half-baked comedy does nothing to alleviate the relentlessly depressing threads which run through this series.
LATEST REVIEWS