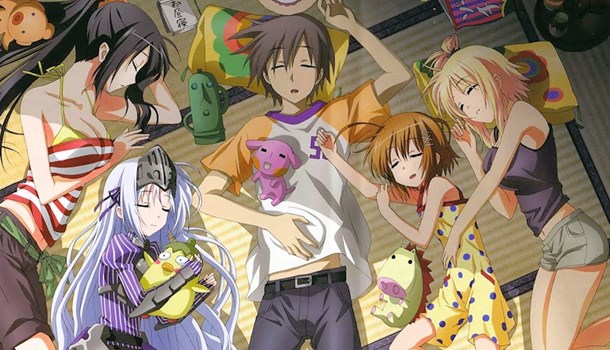 So this season has been a little disappointing for me so far; Rio - Rainbow Gate alone was enough for me to question my existence. But here we have another series that is full of yet more anime clichés... I don't know if I can take much more.

Aikawa Ayumu is a zombie who was resurrected by a necromancer named Eucliwood Hellsythe or Yuu as Aikawa calls her. After Yuu brings Aikawa back from the dead, the pair start living together with Yuu treating Aikawa like a servant. Things start to get weirder as a magical girl arrives on the scene, along with a vampire ninja. It’s safe to say that things get even more bizarre from here.

I was worried about this - a boy surrounded by pretty girls, each with their own powers, which increase in number. Magical girls, vampires, ninjas, big boobs, the quiet one, panty shots, etc etc... you’ll be ticking them off the long list of anime clichés. But unlike Rio, this series actually has fun with those tropes. It pokes fun at the standard norms of regular anime and actually makes some damn good jokes out of them. There will be plenty of times when you start giggling at some of the absurdities that happen during these episodes.

The best way I could describe this series is like an anime adaptation of Being Human. A zombie, a necromancer, a magical girl and a vampire ninja living under the same roof. Chaos ensues and laughs are a plenty. But like Being Human, there is a underlying plot behind everything and while there is plenty to joke about, there is actually something happening behind the scenes to help drive what is going on.

I think it has to be down to the characters that the series is helped along so proficiently. Yuu is the standard mute character who will no doubt come into her own towards the series end. Haruna is the loud-mouth of the group, doing magical girl stuff and cutting up things with her pink chainsaw. Seraphim fills the role of the pin-up along with the angry warrior girl, but it is Aikawa that is the most interesting. Like Kyon from The Melancholy of Haruhi Suzumiya, Aikawa is just looking for a quiet life and is more interested in the mysterious Yuu and his slightly warped imagination of what she is really like.

The fact that Aikawa can’t die, or at least is very hard to kill, does add a morbid sense of entertainment to proceedings. Sort of like the early series of South Park where you would laugh at the jokes, but you really wanted to see how Kenny would die this episode. This is how Kore wa Zombie desu ka ("Is This A Zombie?" in English) works; you watch to see how Aikawa is going to be horribly mutilated, whether it's being cut in half by a chainsaw or having his arm lopped off by a vampire ninja. Though while it isn’t as graphically violent as, say, Hellsing there is still a fair amount of blood, with the constant Japanese warning that Aikawa is a zombie and you shouldn’t try to cut your own arm off. Otherwise this and Jackass would have a lot to answer for.

Everything else is pretty standard anime fare though. There is a high grade of animation with music that fits in well with the series and the plot, and while damn obvious in places it has enough laughs to keep things ticking over. Apart from the presence of an insane magical girl with a pink chainsaw, which I think everyone should own (the magical girl or the chainsaw? - Ed), there isn’t much here that hasn’t been seen before in countless other anime.

Kore wa Zombie desu ka will by no means blow you away, but considering what else is on offer for this season it is by far one of the more interesting and entertaining shows. If you are looking for something that is easy to take in, doesn’t take itself too seriously and is more about having fun with a few laughs, then this is probably for you. It doesn’t push the envelope, but to honest it doesn’t really need to.

7
Not overly unique, but this series has its own charm that helps to see it through.
LATEST REVIEWS