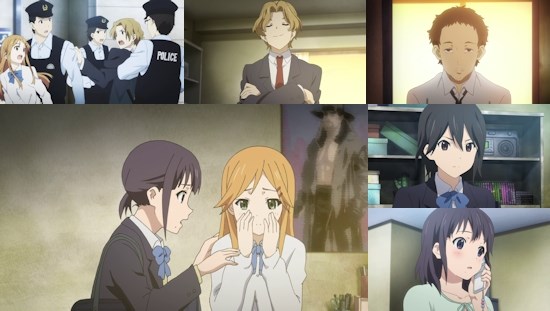 Being a teenager is rough - a rollercoaster of unexpected and unwanted emotional baggage and both physical and psychological changes. In other words, it's not a time of your life when you want anybody messing with your head and stripping away whatever figurative barriers you've erected to protect yourself for their own edification.

Unfortunately for the members of the school's Student Cultural Research Club, they have become the subject of a series of unlikely, unexpected and downright cruel experiments of an unknown origin which is about to test the friendships of the group's five members to the absolute limit.

These experiments all seem rather harmless to start with, and prove to be little more than an irritation as the two boys and three girls of the Student Cultural Research Club - after all, suddenly finding yourself swapped into the body of one of your friends, especially if they're of the opposite gender, can be downright fascinating, even if it presents a number of practical difficulties. However, as those difficulties are overcome with preparedness and rational thinking, it becomes clear that the group are at the whims of a mysterious individual known as Heartseed, who has no qualms about using them as playthings for his amusement.

As a result, these seemingly random periods of occupying one another's bodies begin to take a sinister turn - while some are surely not calculated for within Heartseed's plans as they reveal an unexpected phobia suffered by one of the cast, others are deliberately manipulated to push the group and their friendships to the limit, ultimately with dangerous consequences. Even this isn't the end of the affair however, as there are other experiments to which the group are subjected, seeing their thoughts and desires revealed to one another in ways which they would never have normally wished for.

At first glance, Kokoro Connect seems like a tired old story given a fresh coat of paint - while having characters swapping their personalities into one another's bodies has plenty of potential for entertainment (and make no mistake, this series delivers that entertainment in spades), it's all been done before countless times. Whereas most series based around this premise stop once they've had their fill of comedy however, Kokoro Connect continues onwards to explore deeper territory, delving into the teenage insecurities and flaws of its characters and using the mechanics of its story to force them to face their issues without any option to run or hide.

What truly marks the series out as special is how these insecurities are written - from more traditional unrequited love through to issues like simply not knowing who you really are as a person, the cast their characters and troubles are all handled in a smart, sympathetic and occasionally heart-rending way that draws you into their plight, and with resolutions to each arc that feel satisfying without being cloying or convenient. Provided you can muster the suspension of disbelief to buy into the "experiments" being carried out upon this select group of students, you'll find yourself both laughing and crying with a group of flawed but lovable characters who all serve their purpose of ingratiating you to their personalities while also ensuring that you can't ignore their faults. In short, this series may have visuals that invoke the likes of K-ON, but in terms of character writing Kokoro Connect is head and shoulders above your typical slice of life fare.

Equally impressive is how the series manages to hold up across multiple story arcs - light novel adaptations all too often trip over themselves when they have to write beyond their core premise to fill future volumes, but Kokoro Connect feels like a series that was always designed to span multiple stories and is all the better for it. Even once it progresses beyond its initial body-swapping idea, the depth of its characters and the problems that the group encounters and overcomes remains compelling, and come the end of this run of TV episodes chances are you'll be hungry for the final story arc which will be coming to DVD later courtesy of the show's OVA collection.

We've already compared Kokoro Connect's visuals to K-ON, and the colourful, cutesy aesthetic works pretty well for the series as it proves that it can also adapt to its emotional moments when required of it. While we can't help but join the ranks of those bemoaning the lack of a Blu-ray release for the series in the UK, its DVD version doesn't suffer too greatly in comparison as this isn't the kind of show that relies on spectacular visuals at the end of the day, ensuring that this domestic release is more than acceptable in that regard.

Sadly, we can't find quite so many nice things to say about the English dub of the series, which is mostly passable but features some moments of terrible acting, not least from the English actor for Taichi's character who quickly starts to grate - problematic given that he's the closest we come to a protagonist in the series. Given that, we'd certainly recommend sticking with the Japanese audio on this occasion, and with a solid set of subtitles on show you'll be well served by the strong voice cast available via that option.

Perhaps surprisingly for a series that advertises itself more for a sense of fun and frivolity than its character studies, there's a lot more to Kokoro Connect than meets the eye. When it wants to play up its comedy it's certainly adept at doing so and should commended as such, but it also has a deeper, darker streak that it has no hesitation on leveraging to create some compelling character-centric stories that use those comedic moments that bring us closer to the cast as their springboards. While so many anime series posit an idealised view of adolescence, there's something far more tangible about Kokoro Connect and its characters that those who have been through it can relate to - feeling uncertain about who you are, who you should be and who you like is a pivotal part of puberty, and to have a series that can view this in such a compelling way whilst still entertaining is a special kind of alchemy indeed, brought forth from a very special series that deserves kudos. The lack of a Blu-ray release and the separation of an important set of OVA episodes from the TV series might frustrate you, but you shouldn't allow those frustrations to stop you from checking out this stellar series.

8
Kokoro Connect manages to take a tired old idea and reinvigorate it into a wonderfully entertaining, character-centric effort that lifts it far above your typical high school anime fare.
LATEST REVIEWS