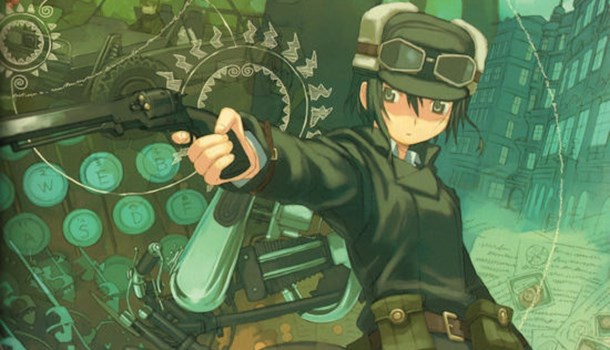 Kino is a traveller . Moving from country to country on her Motorrad, Hermes (which can talk by the way, which is bizarre). She never stays in any country for more than 3 days. These DVD's chronicle her travels and those strange and varied individual's she meets along the way.

I was a little thrown by Kino's Journey. I had expected a whimsical ride through some pleasant vistas with a few colourful characters along the way. Something upbeat at any rate. And for the first episode that's (more or less) what I got. The designs are remeniscent of Miyazaki's films - simple and skillfully drawn, with lush scenery and lingering shots of old-world architecture and machinery invading every background. It's truly beautiful to watch.

However, once we hit episode 2, the series takes a sinister turn, and the stories become darker and more twisted, reminiscent of a traditional Grymm Brothers fairytale. The locals of each country may seem innocent enough, but nothing is ever truly what it seems, and after a while you're on your guard as a viewer trying to second guess everyone Kino meets.

As I mentioned, the scenery and design is fabulous to look at, though the mood may become a little too oppresive if you're not a fan of melancholy tales. The music is pretty good, whilst the direction is always strong, keeping your attention with both its dramatic action sequences and the slower, atmospheric shots that make Kino what it is. Hardly surprising when you consider the Director is none other than Ryutaro Nakamura, who also helmed Serial Experiments Lain, and the character designer is none other than Shigeyuki Suga, the artist behind the similarly distinctive Boogiepop Phantom.

I'm torn with this series - though I liked what I saw, I wasn't particuarly inspired to watch more of it. The bleakness of the story's outlook makes it a little uncomfortable to watch at times, but then similar could be said of Boogiepop Phantom. I guess the best advice is to buy with care - if you're looking for an action packed romp, or romantic intrigue, you'll find Kino wanting, but if you're prepared to invest in a more thought provoking fantasy than most, then Kino could be just the kind of unusual tonic you've been seeking.