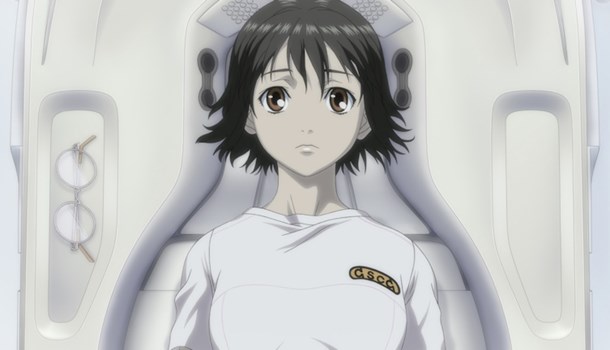 A pandemic sweeps through humanity, turning its victims to stone. This "Medusa" virus threatens to wipe out humanity, and on a remote island, steps are taken to combat this threat. An organisation named Venus Gate selects infected candidates from around the world to enter cryogenic suspension until a cure can be found. Kasumi, a teenage girl and Medusa carrier, is selected to enter without her twin sister Shizuku. Traumatized and overwhelmed by the events that surround her, she enters the suite in a state of apprehension.

Kasumi awakens with the other cryogenic candidates to find the facility overrun by thick, monstrous thorns. But other things lurk in the shadows, and it isn't long before hundreds of candidates are devoured by monstrous creatures, until only six remain. The survivors include a British soldier, a politician, a failed mother, a young boy and a burly, intimidating man who has a fatalistic outlook on life. Along with Kasumi, they try to understand how long they have been asleep and the events that led to this nightmare; these six must try to get to safety and call for help... if any such help even exists.

King of Thorn is adapted from the award-winning manga by Yuji Iwahara, though it takes major liberties with plot, background and even the ending. It's a film that was made for HD, so it's a welcome addition to Manga Entertainment's growing Blu Ray catalogue.

It's a utterly sumptuous looking release, full of colour and detail. The castle that houses the facility already looked like it was plucked from a fairy tale, but surrounded by thorns and full of monsters, it looks every inch the twisted nightmare. The creatures inhabiting the crumbling castle are genuinely ghastly, and I admit I cringed at the wholesale slaughter of the initial group of cryogenic subjects once they were awakened. It's a visceral and heart-rending sequence that, if I'm honest, I don't really think I could stomach watching again.

In fact, while the film looks and sounds fantastic, the core concept is one that will polarize the audience. It's an exciting film to be sure, with a lot of breathtaking chase scenes, heart-pounding scares and some amazing animation sequences, but for the faint of heart, this is a hard film to watch twice. The film's big reveal is the sort of sci-fi logic that only seems to work in anime, and while it's a film I was intrigued by, I'm not sure I actually enjoyed it.

It doesn't help that the storyline has been radically altered from the superior manga, with back-stories watered down, important characters omitted entirely and a rushed explanation of the virus that really required the deft manga origin in full to be really convincing. The flaws in the narrative mean that the film's logic takes a knock where it really ought to be winning us over, you do rather leave with the impression that the creative talents involved cared more for the atmosphere and visual flare than the underlying plot, which is a shame.

While the film has its issues regarding pacing and character development, it's never less than a spectacle of the highest order. The budget is clearly evident on-screen and the English dub is also of a high quality.

If you're looking for an exciting, monstrous way to spend an evening and have a strong stomach, you'll love King of Thorn. For anyone who prefers their anime with a more optimistic outlook, I'd keep walking. This is the kind of film that will keep you up at night.

"King of Thorn" comes with the following special features:

Pilot Film - (1:54) A short pilot (usually created to get animated sponsors to create a feature film).

8
A bleak film that's not to everyone's taste perhaps, but there's no denying the big budget scares are spot on for horror fans.