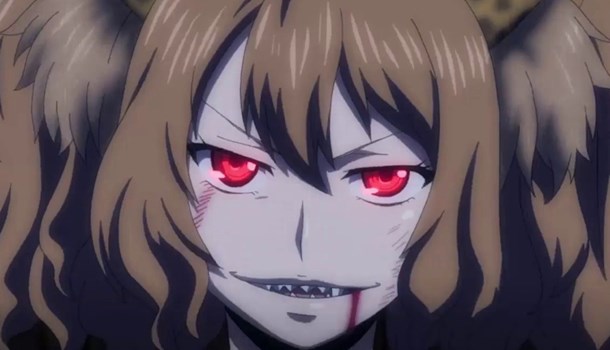 I am on a bit of a mission with my close friends: I am trying to sell the idea that “Killing Bites is anime of the year” [Ed - Good luck with that...]. Now, stop laughing. I know how farcical this may seem, but I kinda have my reasons for this belief.

For those who are not aware of what this animalistic masterpiece is: Killing Bites is a fighting anime, where people called theirenthropes fight each other using special animal powers, all in the name of their corporate overlords. Killing Bites is the name of the fights - sometimes to the death - to settle disagreements between the companies, and these fights have been the cornerstone for the key decision making processes. Killing Bites is awesome fun, it’s also completely and utterly dumb and brainless. This is a good thing, as sometimes you just need something fun.

Killing Bites is a long running manga series from Takeru Sumita (known for the series Witchblade Takeru), which the anime closely adheres to in almost every way. It follows the pairing of Yuya Nomoto - a university student who finds himself being the unwitting accomplice to the kidnapping of a high school girl, and Hitomi Uzaki - the kidnapped high school girl, who happens to be a honey badger theirenthrope. Their meeting was a complete coincidence and, after she brutally butchers her would-be rapists, she asks him to drive her to a scrap yard, where a different game awaits them both. Yuya and Hitomi walk into a ring, where a somewhat odd bloke awaits them both. This turns out to be another theirenthrope, a Lion hybrid, as he and Hitomi are due to fight each other for the glory of their companies.

Little does Leo know that the honey badger fears nothing, and you never want to mess with a honey badger when she is annoyed - or in Hitomi’s case, amused or aroused. Following this battle Yuya meets Hitomi’s guardian, Reiichi Shido, who then grants Yuya the guardianship and protection of Hitomi. Shidou also provides Yuya with enough money for him to act as Hitomi’s financial backer, so that she can take part in The Destroyal: a huge battle between the four major corporations. But for what reason does he risk his precious Hitomi?

Yuya ends up living with Hitomi, and as you can expect from a girl who is half human, half fearless and vicious mammal (assuming that humans aren’t vicious mammals of course), life turns out be a very fun, terrifying, and interesting experience. From her attending school with Yuya, to her encounters with the fast and feminine Eruza - a cheetah hybrid with a taste for cute girls - and her battles with the porcupine in the park, Killing Bites never lets up on the action or the animalistic frenzy.

Let’s get down to the good stuff: it's no secret I am a fan of animal girls and when I saw this series on the season preview there was no chance in hell I was going to miss out! Killing Bites promised gore, action, occasional lewd scenes, and fanservice (maid Hitomi and Eruza are simply wonderful) and it delivered, without biting off more than it could chew. This series offers animal girls (and men) fighting with insane powers and little regard for each other’s well-being. At the same time it also provides an education in the same way that Kemono Friends did. You get detailed descriptions of each of the animal’s abilities: their weaknesses, strengths, and fighting styles. It’s all thoroughly interesting yet relaxing and the strange Japanese Attenborough just adds to the style of the show. The only weakness is, well (other than the somewhat repetitive dialogue), the plot.

The manga isn’t an amazing work of art, the writing is somewhat poor and the back story is weak at best. The fights are the highlight of the series and feature in most of the screen time, but the board table games and the arguments between Yuya and the other company representatives are more than a little special. The highlights of the series, as they should be, are the battles between the theiranthropes. From Brute Bunny to the impenetrable Brute Pangolin, the battles are wonderful, ludicrous and utterly brainless.