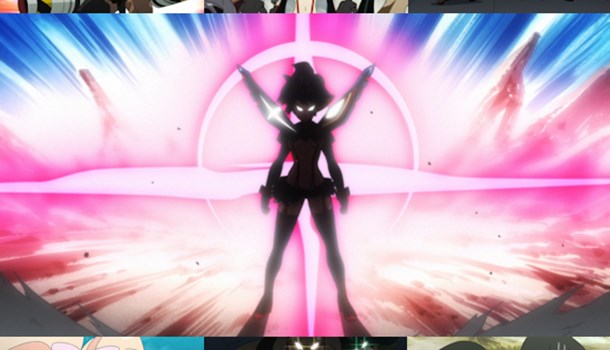 After a seemingly impossible amount of twists and turns, action and emotion, shocks and comedy, we come to the third and final volume of Kill la Kill's UK home video release. Given the revelations at the end of part two, it couldn't be a worse time to re-join Ryuko and the motley group of which Nudist Beach is now comprised either.

For Ryuko's part, she's been left in utter turmoil having come to recognise the true nature of her existence, which unsurprisingly pushes her into a spiral of vengeance and self-loathing which even best friend Mako is unable to keep in check. Thus, ignoring the collective calls to calm down and take stock of the situation from those around her, Ryuko instead journeys to seek down Ragyo... and walks straight into the trap laid for her as a result.

From this point forth there's little time to take a breath (which isn't exactly a unique situation to find oneself in when watching this series), as Ryuko's allegiances are forcible shifted this way and that before the final assault on Ragyo and Honnouji Academy begins, with humanity's entire future left teetering in the balance. Even the conclusion to this potential extinction level event isn't truly the end, as we still have an additional OVA issue to offer up one last hurrah to the cast and one of its forgotten villains.

Such is the pace and passion of its delivery that it's hard to fault this final volume of Kill la Kill on that front - everything that it does is brash and bombastic, a cavalcade of intense (or intensely funny) character moments and major plot hooks that drags us all the way through to an unsurprising but satisfying resolution. The only real issue in this final chunk of the show's narrative is Ryuko's constantly flip-flopping personality, which carries over from part two - one minute she hates the world and is a fiery ball of selfishness, the next she's back on track and doing the right thing. Admittedly, she is a teenager so her indecision and mood swings make sense, but it all gets a little tiresome and occasionally feels overly drawn out.

This, however, is a minor quibble levelled at a hugely entertaining finale - a perfect synergy of music, visuals and story that acknowledges its own ludicrous nature ("not making sense is kind of our thing" the cast shout proudly at one point) and revels in it in a way which would feel forced in lesser hands, but remains utterly natural and compelling here. If you're sufficiently invested in Kill la Kill to have picked up its first two instalments, then this third will give you everything you desire out of its finale.

Visually, this final volume looks superb on Blu-ray - Trigger can pull off minimalism in their animation one moment and grandiose, kinetic action scenes the next to provide a stylish send-off for the series. Admittedly, their "cardboard cut-out" style of animation shorthand is starting to get old now thanks to its overuse in the dreadful Ninja Slayer, but levelling that later work at this earlier effort from when the concept felt smart and was well-utilised is a little unfair. Sawano Hiroyuki's soundtrack also powers every scene forward with aplomb, leaving us to suspect that this series would be lesser as a whole without its energy accompanying it. Finally, subtitles across this release are impeccable, while both the English and Japanese language tracks deliver an energetic and enjoyable viewing experience.

One area where those concerned about value for money may be a little more disappointed is in the content of this final volume - with only six episodes and a single Blu-ray required, and with a smaller (but still glorious) art book largely focused upon backgrounds from the series bundled in, there's less content to be consumed here without question. The value proposition has been upped by the inclusion of a limited edition solid and wonderfully monolithic art box with which to store the entire series for its first print run, which is a great way to protect and display the series on your shelf provided you don't mind dispensing with the "belly bands" which accompany each volume to fit all three boxes in. As is always the case with these things, how this value proposition strikes you is an entirely personal one, but if you value tangible content over pretty packaging then you might feel inclined to suggest that this volume should be a little cheaper than the first two.

Such discussions aside, the crux of the matter is this - Kill la Kill is an incredibly entertaining series from beginning to end, and its final episodes don't disappoint in that regard; heck, even its OVA finale manages to up the ante a little further in some respects rather than the usual anime strategy of sending the cast to a bath house or similar. It might not be the perfect series - some of its character moments miss that mark, and once or twice it veers into questionable territory - but it's frighteningly close in a lot of respects, and although its style and story aren't for everyone in our minds it's one of the most fun viewing experiences we've had in recent years, even at the second time of asking.

"Nonsense is how we roll" boasts the series in this final volume. We suspect that Trigger are becoming an animation juggernaut that won't stop rolling any time soon.

Physical extras in this Collector's Edition consists of an additional book of background art from the series, and collector's packaging. The first print run of this release also includes an additional collector's art box, within which the entire UK release of the series can be stored.

8
There's less content to enjoy in this final volume of Kill la Kill, but everything it offers makes for a wonderfully entertaining finale to the series.
LATEST REVIEWS