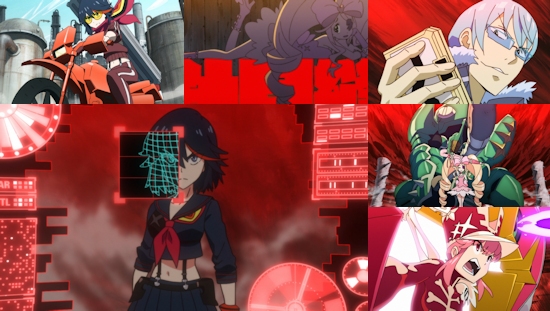 It really hasn't been all that long since the first volume of Kill la Kill arrived in the UK on DVD and Blu-ray in the grand scheme of things, but the fact that it feels like an incredibly long time is telling of the quality of the series in its early running. Regardless, the second of three volumes of Kill la Kill is now arriving in the UK on disc, so let's strip it naked and see how it looks.

Thanks to the oddities of the UK's three volume split for the series, we return to the action slap-bang in the middle of its so-called Naturals Election arc - and what a place to return to, as we're thrown into some of the best fare that the series has to offer, with Ryuko taking on the Elite Four for the opportunity to finally gain the showdown with Satsuki Kiryuin that she desires.

Of course, nothing is ever that simple, and an unexpected interloper throws this "election" - and plenty more besides - into chaos. This is normally the point where any other anime might choose to take a bit of a breather and explore some other elements of its show and characters, but pausing for breath isn't Kill la Kill's style and thus we're almost immediately tossed into the midst of another major story arc, as Satsuki's nefarious schemes take her Life Fibre imbued troops out of Honnouji Academy and onto the road as she seeks to implant and extend her influence into Osaka, Kyoto and Kobe. Cue more pitched battles, spectacular action and at last some insight as to where the Life Fibers and the terrifying clothing they imbue originate from in the first place. Yes, there is a method to Kill la Kill's madness believe it or not, and the move towards its final volume puts the pieces in place to begin exploring this fully... and by "explore", I mean "use as an excuse for another round of bonkers action with larger than life characters".

As we've just mentioned, the progression of Kill la Kill's Naturals Election story arc is an exhibit of this show at its peak - indeed, the first episode of this collection has more entertainment value alone than some entire anime series! Its fast, frenetic, funny, and a wonderful example of taking the clearly very limited animation of the show and using it to its full advantage to accentuate its action, comedy and drama in equal measure. This isn't to say that everything about the series looks cheap, mind you, as it clearly keeps its powder dry for occasional jaw-dropping moments which are used to punctuate its most important skirmishes.

Some series would struggle to keep up the pace after delivering such a period of blisteringly fast and fantastic viewing, and it's a testament to Kill la Kill that it continues to escalate its story and plot at confident speed, even squeezing its "compilation episode" into ninety seconds prior to the opening credits before self-referentially referring to it as a perfect example of how Kill la Kill goes about its business. That the Tri-City Schools Raid Trip manages to match (and on occasion best) what has gone before tells you plenty about the level of consistency that this show works to, and even though it does necessarily have to slow down a tad in the wake of that for an episode of important exposition it's soon picking up the pace once more.

The series continues to be helped along ably by its cast - the lovable Mako continues to be perhaps one of anime's greatest comic relief characters (yet also an important individual in her own right in narrative terms), while the various unusual alliances and rivalries that crop up, dissolve and change all play their part in ramping up the overall entertainment value. Oddly, it's protagonist Ryuko who is perhaps the weakest link, changing her mind on what she wants to fight or not fight for more often that she changes her clothes, with every pun intended.

The sheer energy of the show isn't just exhibited in its visuals, but also its audio - the show's Sawano Hiroyuki soundtrack continues to be sublime in its bombastic accompaniment to the series, and both Japanese and English voice casts give it their all in matching on-screen events enthusiastically. Indeed, you could argue that the English script is a little too enthusiastic when it comes to money-mad Kaneo Takarada - you can understand what they were going for, but that doesn't excuse how teeth-grindingly terrible and ill-fitting a choice it is. Still, this is but a small slight against an otherwise decent dub, and the Japanese audio track remains superb throughout.

Having checked out this volume of the series via its Blu-ray Collector's Edition, you'll be pleased to know that the on-disc presentation here is virtually impeccable - video quality is terrific, audio quality is great, and subtitles are now without any of the hard sign subtitles which some took offense to in part one, and are almost flawless but for one incorrect use of "you're" instead of "your" that we spotted. Yep, that's as harsh as our criticism of this element of the release gets, unless you want to hear us opine that the Madman Entertainment fanfare logo doesn't look it uses the Blu-ray quality assets...

As per its first volume, the Collector's Edition of Kill la Kill part two features a 200 page art book (212 pages to be precise), taking in volumes two and three of the key animation book provided with the show's Japanese release. While the first volume's enclosed book contained a mix of storyboards and key animation, this book solely features key animation, and as ever with these things its value is dependant upon how invested you are in the series and its visual treatment. For our money this is a valuable addition to the release of a whole, highlighting the skill and craft behind the sometimes deceptively simple animation style of the series, and the high quality presentation of said book means that it'll sit on your coffee table as well as it will the hard-cover box which houses both book and Digipak sleeve for the discs themselves. Indeed, between its three-volume release strategy and the addition of these art books, we'd say that the UK is getting a better deal than the US in this regard. You can see more on this Collector's Edition in video form over here.

Much like Hiroyuki Imaishi's other directorial works, Kill la Kill isn't for everyone - its brash, in-your-face attitude and presentation may be off-putting to some, while its fan service will be too much for others no matter how smartly its integrated into the very fabric of the show's story. Assuming you enjoy the first part of this release however, the good news is that Kill la Kill's second volume is subtly but noticeably better for the most part - with the core of its story in place, it makes full use of the opportunity to floor the proverbial accelerator and rocket through some of the most exhilirating episodes of anime you're likely to see in this or any other year. Put even more simply - Kill la Kill is an incredibly fun series to watch, and the episodes on these two Blu-rays are a perfect embodiment of why.