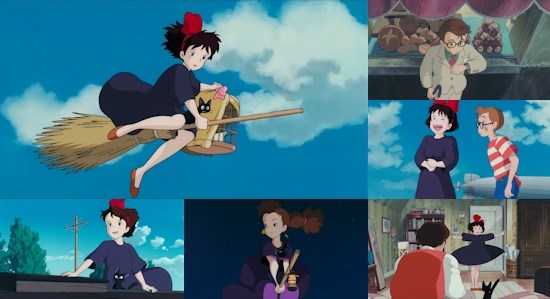 After a Japanese release last year, another set of UK Studio Ghibli Blu-Rays arrive here in the UK from STUDIOCANAL - although we aren't getting the rather wonderful Only Yesterday in High Definition at the time of writing, we are however being treated to a remastered release of another true Ghibli classic, that being Kiki's Delivery Service.

Originally released in Japan in 1989 and based on a children's novel, the plot of Kiki's Delivery Service couldn't be much simpler, allowing us to follow the film's titular character (and her pet cat Jiji) as she leaves home to live alone for a year and set herself up in a new location, as is witch tradition within this world.

Of course, not everything is likely to go smoothly when a thirteen year-old girl ups sticks and goes out into the big wide world on her own, witch or otherwise, and after settling upon the city of Koriko as her new home it soon becomes clear that this is a place a million miles away from the friendly and comfortable demeanour of her family home. No matter this negative introduction to the city, Kiki is determined to make a go of her new life, and good fortune smiles upon her by offering both a place to stay and an innovative business idea that gives her a sense of purpose. This isn't the end of Kiki's trials and tribulations, as the very essence of her position as a witch is thrown into question at the worst possible time.

The upshot of all this is a hugely enjoyable and light-hearted film that belies the simple pleasures that it offers by having a very solid thematic philosophy running through it; one of growing up and learning to get by in the world through determination and hard work alone. This coming of age story in the purest sense is almost exquisitly paced and scripted - never rushing to hit its high notes but similarly never spending too long ruminating on things before moving forward to wherever it intends to head next.

All of this is delivered in Studio Ghibli's typically sumptuous style - fluid, full of movement and colour and (particularly important given its city setting) detail, which fleshes out a living and breathing environment that adds greatly to the viewing experience. Needless to say, seeing all of this play out in High Definition is a real treat, and as per previous Ghibli Blu-Ray releases it looks and sounds simply superb and holds a decent number of extras to boot. Even if you own the film on DVD as well (and this is a DoublePlay release which also includes the DVD if you don't, incidentally), this is a worthwhile upgrade if you want to enjoy the movie in all its visual finery.

There really isn't much more to say about this release of Kiki's Delivery Service - it's a classic for a reason, and this new Blu-Ray treatment only heightens the sense of satisfaction that comes from watching it. It may not be the most challenging of Studio Ghibli's works, but as a family-friendly dollop of pure, unadulterated fun and entertainment, there isn't much out there to match it.

9
Wonderful visuals, great fun to watch and a perfect family film - no surprise that this is one of Studio Ghibli's most loved works.
LATEST REVIEWS