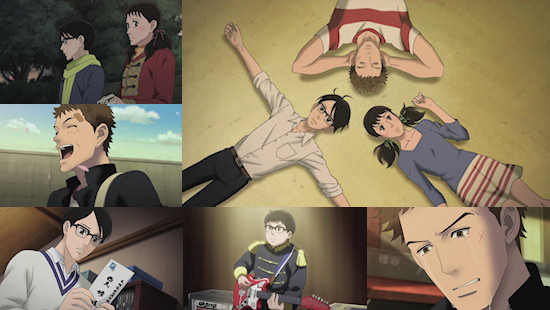 When we reviewed the first four episodes of Kids on the Slope, we couldn't help but gush about virtually every aspect of the series - its small-town 1960s aesthetic was wonderfully realised, its characterisation and character development was superb, and the drama surrounding those characters and their interactions with one another was compelling but still realistic enough to be believable.

Thankfully, all of this praise remains in place for the remainder of the series, as we watch the initially unlikely friendship between Sentarou and Kaoru grow and develop, while also seeing it become strained as the pair's respective love interests shift, move and become even more entangled within proceedings to create much of the drama within the mid-part of the series.

In fact, such is the focus on romance for a large part of these episodes but for a while we forgo our main protagonists almost entirely to instead focus upon Yurika and her interest in Sentarou's occasionally wayward "brother", Jun.  This creates a lot of pure soap opera that fits exquisitly into the show's 1960s setting via a relationship that would perhaps raise less eyebrows in the here and now, but most importantly the mainstay of the story surrounding this pairing culminates in one of the most raw, intense and emotional pay-offs you're ever likely to find in anime - it's a notable high point in a series with no shortage of them, and as the end credits roll for that particular episode you're left drained and, most likely, a little tearful.

After this very welcome distraction, our thoughts soon return to Kaoru, Sentarou and Ritsuko, and the bonds between them that brings laughter when required, but also hardships for all three of them as they struggle to cope with their own feelings and other events which play out around them.  It's these latter moments which really serve to feed the main drive of the series - a treatise of the beauty and importance of friendship.

Unfortunately, this determination to prove the power of friendship does lead us down the direction of a rather weak ending - after a first half to its final episode that is heart-breaking but very much in keeping with the sense of reality which pervades the series, the second half feels more like a flight of fancy crafted to ensure a happy ending even if it requires a significantly escalated suspension of disbelief in comparison to the rest of the show.  It seems that this jarring disparity between the two halves of this episode is largely down to a requirement to cram too much material from the original manga into too few episodes, but the reliance on a "mandatory happy ending" is not necessarily a good thing, and for me personally it doesn't work in Kids on the Slope's case.

While we're having a moan (it's theraputic, you know), Kids on the Slope could also be criticised for forgetting about its jazz music heart from much of the series, only returning to it from time to time.  For my own part I really have no issue with this - music is added to the show's mix primarily to initially foster the relationships between its characters, not necessarily to sustain them - and there's still enough of an emphasis upon music for it not to have felt conveniently forgotten.  If you're only intending to watch this show for its soundtrack and some jam sessions however, prepare to be disappointed as they become fewer and farther inbetween as other elements of the story take precedence.

Come the end of it all, Kids on the Slope really is a notable work for its time - a series that eschews a lot of the tropes and colourful characterisation of much modern anime in favour of something more organic, believable and realistic.  Here is a series that could have been a live-action drama and worked just as well aside from the difficulties of recreating an authentic 1960s feel; this may disappoint purists who want their anime to dare to be different, but to my mind it provides one of the most mature and genuinely emotional offerings of late.  If you're looking for a drama that knows expertly how to run the gamut of human emotions; to make you laugh out loud and make you cry, Kids on the Slope is stunning both visually and courtesy of its characters and story-telling.  It's a true triumph, and one that deserves a far wider audience than it will most likely ever receive.

8
Despite a weak ending, Kids on the Slope is still a beautifully portrayed journey in terms of both visuals and plot, and marks itself out as one of this year's must-watch series as a result.
COMMENT AND DISCUSS
blog comments powered by Disqus