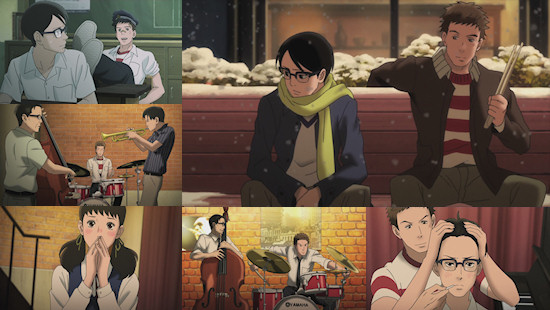 With a mid-1960s setting and jazz music as its period driver in the background, Kids on the Slope certainly fulfils the demands of daring to be different as part of its place within this spring's noitaminA timeslot on Fuji Television - luckily, we're also able to watch the series for ourselves courtesy of Crunchyroll, and although this series might prove to be a hard sell to the average anime fan given its premise we should be eternally grateful that we've been granted our place in the show's legal audience here in the UK.

In its most basic terms, Kids on the Slope sounds like a rather predictable affair as we're introduced to the smart, brainy Kaoru - a young man who has recently moved from the city out to the country and is suffering for it - and his classmate Sentarou, a delinquent who nobody with any sense dares to cross.  With the former suffering from panic attacks on account of feeling so out of place amidst the withering glares of those around him, his only route of escape and relief is the roof of the school building - or at least it would be if the aforementioned delinquent didn't have an equal interest in access to the roof.  Thus, Kaoru's desperation leads to him scrapping with Sentarou as they grapple for the key to access their chosen safe haven - not the best of introductions, but one which twists and morphs into friendship as rivalry and shared interests merge; namely a love of music, although even this initially sees some marked differences between the two.

Alongside music, there's another important factor which holds Sentarou and Kaoru together - the former's childhood friend Ritsuko, who soon turns into a romantic interest for the latter.  Throw in a smattering of additional characters, and you have yourself a suitably complex (but never overly so) web of relationships and potential love interests to add an extra dimension to proceedings.

As I've already mentioned, a cursory look at Kids on the Slope makes it sound clichéd and predictable, but with that brief synopsis out of the way I can't stress enough that this really isn't the case.  Above all else, this series manages to create a roster of characters that feel undoubtedly and entirely real and human in their actions - Kaoru and Sentarou's basic personalities may be common in anime, but their behavior is rendered in such a natural manner that it's never any less than completely plausible, and more importantly as the series develops and we learn more about these characters their backgrounds and histories come to the fore in vivid (and sometimes heart-rending) detail to further strength the plausibility of the main character's friendships as well as our own attachment to them as individuals.

This spot-on eye for characterisation and developing those characters situation and emotions is accentuated by the show's setting - its small-town 1960s vibe is depicted beautifully in terms of both the look and feel of the series, and you can't help but be drawn into its coming of age story as our main characters goof around on a day off, attend school or wander around their local area.  The attention to detail and natural beauty of the series really can't be under-estimated, with care taken in ensuring that the realism of both characters and their backdrops match the efforts of the story itself.  Even when it comes to the rare action scenes or brief musical sequences demanded of it, the show's animation is incredibly thorough in its attention to detail, as it simply never skips a beat (with every pun intended).

Then there's the show's music - given that Yoko Kanno is in charge of the musical element of the show there probably isn't much more I need to say here, but the subtle jazz infusion utilised throughout does its job excellent and you often barely even notice the show's soundtrack until any musical elements within the plot itself come to the fore.  It would have been easy to fill the backdrop of the show with "in your face" jazz, but this more considered smattering of music stands it in much better stead.  Special mention also has to go to the show's opening theme, which pretty much sums up the show it heads to a tee with its slow, considered start that suddenly bursts beautifully into energetic life at its mid-point.

To be quite honest, there's next to nothing I can find fault with in Kids on the Slope up to this point - although it dallies with predictability it soon breaks free of such concerns to become very much its own series; a beautifully depicted, intelligent and thoughtful coming of age series that I can't praise highly enough, to the point where it all but raises the bar for slice of life romance in anime.  Even if you're not a fan of jazz or typically balk at shows with period settings such as this, you really should make an exception here to give Kids on the Slope a try.

9
Visually sumptuous, intelligent and beautifully delivered, Kids on the Slope looks set to raise the bar for anime of its ilk.
COMMENT AND DISCUSS
blog comments powered by Disqus