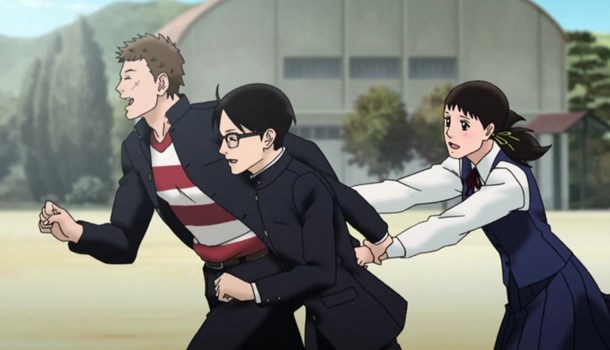 When I was taking my second grade piano exam, the examiner asked me a question about my future as a pianist. He asked: “What kind of music do you like? Do you like to compose your own melodies, or follow someone else’s score?” I replied in a predictable way, stating that I wasn’t very good at making up melodies on the spot, etcetera. His response was quite frank, and that was “So, you aren’t going to end up being a Jazz musician then…”

That comment has stuck with me for a long time and to be honest, I never understood what the guy meant at the time. To be frank, he was a bit of a twit.

Having watched Kids on the Slope, and protagonist Kaoru’s transition from a rigid classical pianist (admittedly, a truly superb musician) into an inspired interpretive Jazz musician, I think I now understand what the examiner was on about. Jazz and the ability to create music is not only a creative art form, but it’s a frame of mind. Jazz, and to a greater extent Blues, is generally created by people who are not only talented musically, but also have a deep trauma which they use as a conduit for the music to flow. Without this trauma, the music has little meaning to the musician and could be perceived as simply a wall of noise to the audience.

Kids on the Slope is a character-driven series, set in 1960s Japan and focused around three main characters. First is Kaoru Nishimi, a introverted eccentric genius from a high class family. Kaoru has moved home constantly, following his father whose work out at sea means that Kaoru never has any chance to settle down and make friends. He is a shy, neurotic individual who at times has an arrogant air about him. However, when Kaoru meets Sentaro Kawabuchi during a panic-attack induced adventure to get onto the roof of his school, that all changes. Sentaro is a bit of an odd duck - a giant among men whose outwardly thug-like appearance hides a kind, religious soul. He cares for his large adopted family with his foster parents and has a big heart for Jazz, his faith, and his life-long friend Ritsuko who, with her double bass playing father, own the music shop next door to Sentaro’s family’s house. So neighbourly are they in fact, that they share a common bathroom. Ritsuko lives alone with her father after her mother passed away. She is a very shy and quick to judge individual and after getting to know Kaoru a little better, becomes his friend as well. All three of them become close, hanging around together at their high school on top of the hill, whiling away their formative years talking nonsense, chilling out and playing sweet music together.

Thankfully, that last sentence was not true.

Kids on the Slope, with these three main characters forming the focus of the series, is not as simple as that. Each of these young individuals are hurt, and are hurting, inside. Hurt by their anxiety, their need for family and closeness, and by their unreciprocated feelings for one another. Through his introduction to the world of jazz through Sentaro’s insistence, and Ritsuko and her father’s shop, Kaoru is able to find some temporary respite from his anxiety and fear through the syncopated rhythms on the piano, at least until he is trapped into spirals of further panic brought on by his developing feelings for Ritsuko and the impact that others have on Sentaro.

Unfortunately for Kaoru, Sentaro - although a thoroughly intelligent individual - is blind to his feelings when it comes to Kaoru’s misguided sense of betrayal, and he doesn’t appreciate what impact his decisions have on Kaoru’s sanity or on Ritsuko. His dealings with Junichi (Brother Jun), the college bound trumpeter; with Yurika, a beautiful girl whom he helps on the beach; and with Seiji Matsuoka, a strong willed, camp chap with a destiny to become a well-known idol cause friction within the group. It is these interactions, these people’s stories and how our three main characters deal with these situations, which drives the series forward.

As you have probably guessed, Kids on the Slope is very much a character-driven series which revolves around the evolving relationship between Kaoru, Sentaro and Ritsuko. There are no cute girls (hey, apologise to Ritsuko, you meanie! - Ed) eating cake in a band here. No... all this series has to offer is a four piece band of jazz-loving men drawn together by their friendship and mutual respect for the music. There are no cat ears, only cool cats who need to jam. Unfortunately for the group nothing lasts forever, and like the traumas which they all use as their muse, people change, grow and drift away.

Kids on the Slope is excellently written, and to accompany the script is a superior soundtrack. Known for her excellent taste in jazz and her ability as a world class composer for series such as Macross Plus and Frontier, Ghost in the Shell, Cowboy Bebop and Darker than Black, Yoko Kanno gives it her all and provides Kids on the Slope with a memorable score which, in my case, leaves you with ear-worms for days afterwards. The score is quite tactfully mastered in some rather unexpected ways, but it remains effective even during some quite dramatic dialogue. I have it on quite good authority that a particular scene on the second disc is mastered in this particular way on purpose to allow dialogue and to convey Sentaro’s feelings.

This is where the unfortunate news of the dialogue has to fit in. The English dub isn’t the best, which is a pity considering how pivotal the dialogue and the feelings conveyed in the acting is to the story. The English actors, although perfectly proficient and clear to understand, are flat with little emotion being conveyed through their voices. The Japanese dub, to be fair, isn’t actually all that much better in my personal opinion. While I understand the boy’s reactions being far from emotive, I would expect there to be more life in Ritsuko’s and Yurika’s voices. However, this being said, the lack of emotion is nothing compared to my pet peeve, the continued un-necessary use of Japanese honorifics in an English translation. This seems to be a symptom of this being a Sentai Filmworks production, as similar issues plagued the English dub for Bodacious Space Pirates.

This semi-obsessive pet peeve aside, Kids on the Slope is more than I expected it to be initially. Having first seen the series streamed several months ago, I initially found it to be quite dry but with a second sampling, like with any good album, the series has grown on me. There are times when I find myself horribly frustrated with the characters - Ritsuko’s cowardess, Kaoru’s stubbornness or Sentaro’s emotional blindness - but this is part of the series’ charm. It is proof that the depth of these characters, the details into their individual histories and their personalities have a lasting impact, so much so that when the final episode came around... well, I felt sad. It happens. Kids on the Slope will give you an emotional ride, and it’s well worth owning.

As a final note, this review is based on the DVD version of the series and not the Blu-Ray. I understand that the releases are identical, except for the picture quality and because of this we have chosen not to specifically mention the picture quality. However, judging from the animation and the artwork seen in this DVD release, I suspect that the Blu-Ray version will be worth the upgrade.

7
If the characters don’t win you over, the music certainly will.