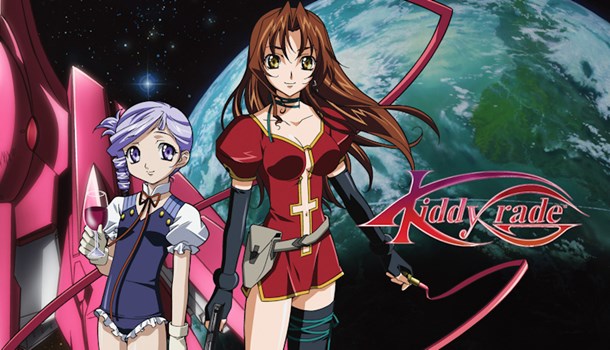 Kiddy Grade always struck me as a title more reminiscent of ADV's catalogue than MVM's, but as the UK's second biggest anime distributor, maybe I shouldn't be surprised to see a 26 episode Gonzo title sat on the shelves with the MVM logo slapped on it. Even better for we fans is the fact that Kiddy Grade is a 26 episode series worth shelling out on.

The story revolves around the GOTT, a galaxy wide trade authority that settles disputes between competing worlds. Key to the GOTT's supremacy is the use of ES members, an elite squadron of operatives who, working in pairs, take on the most dangerous missions. Enter Lumiere, an erudite and sociable young lady with a talent for computers, and her tomboy partner Eclair, with a talent for destroying things... As junior ES members they're still learning about the GOTT's true motivations, but as the volumes stack up it becomes clear that all is not what it seems - our two heroines are clearly far more than they appear (and are a mystery to even themselves) and the GOTT may in fact be less than the benevolent authority it portrays to the general public...

Whilst slow to get started, with most of the running plot not emerging until as late as volume 3, Kiddy Grade manages to entertain with even the most superficial episodes, and with the sharp and lively designs the eye candy is plentiful and worth a second viewing. The English dub is good enough to persuade those who can't always be bothered with subtitles to make it their preferred language (although Japanese is here too - MVM have long since learned their lesson with that one!)

In terms of the extras, they're okay but nothing special - gallery, character bios (always the same on every disc, making them a bit pointless after disc 1) and the obligatory creditless titles, so there's evidence of effort, but nothing worth getting excited about.

Overall, Kiddy Grade is well worth a watch - light, entertaining and getting darker by the episode, there's something here for just about everyone.