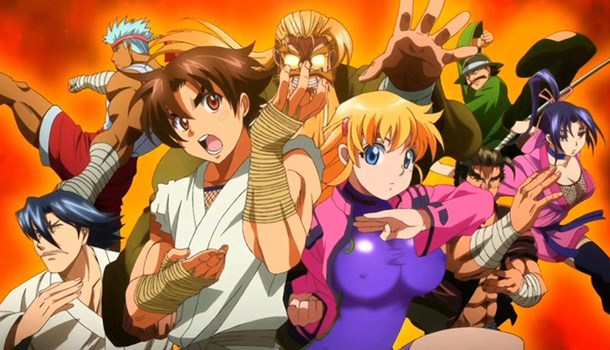 You know when you have a lazy weekend day with nothing pressing to do, so you decide to sit back with a large pot of tea and a bowl of grapes and watch anime? Well, Kenichi is a perfect show for when you have one of those days. At least, it is now I've watched the show for this review. I recommend it heartily.

Kenichi: the Mightiest Disciple (also sometimes translated as “History’s Mightiest Disciple Kenichi”) follows the adventures of the titular Kenichi, a high school student who is, lets not mince words here, a coward. While he is full of principles and high ideals, when the rubber hits the road he finds a way to talk himself into chickening out. However, when a comically buff member of the school’s karate club challenges Kenichi to a duel, he resolves to finally stand up for himself. New transfer student Miu offers to help him out, and takes Kenichi to her home - Ryozanpaku, a martial arts dojo that houses a gaggle of eccentric but undeniably powerful masters of different styles. Becoming a student of the dojo, Kenichi begins training himself in order to stand up to bullies and protect his friends from a string of increasingly menacing threats.

Kenichi has a very straightforward premise - main character fights a linear sequence of opponents, each one increasing in strength and with their own character quirks and aptitudes. Those he beats tend to reform themselves and some become allies from that point on. Stop me if you have heard this particular premise before! As such, the majority of Kenichi is made up of training and shenanigans inbetween various climatic fights, something which initially sounds dull but the show manages to make into a great strength.

This is because the training is (gasp) actually made interesting to watch by directly relating the various techniques he needs to learn to survive, and never lets these various training segments outstay their welcome. It has very few extraneous or distracting elements - no overwrought world-ending conspiracies, no overlapping love polygons, no supernatural gumph, and no weird hidden powers. It’s honestly refreshing to have a show just get on with doing something and, crucially, doing it well. The show has tight pacing, particularly in the first half of this set - moving from fight to training to fight to everyday life with a measured pace that really helps to keep each item interesting.

The fights in particular are great fun to watch, even when you break them down and realise that the majority of screentime is actually explanation of what is happening. This ability to be engrossing at all times through these different building blocks is perhaps the series’ greatest strength. While this slackens somewhat around the halfway mark due to some slightly flabby filler (including an obligatory beach episode), the show picks up again on the fourth disc as it gets back into advancing the plot, showcasing some more interesting antagonists.

It also helps that the cast are great fun to watch - most are built on well-worn archetypes but have enough of an original spin to make them engrossing and unpredictable. Kenichi himself is great as he has absolutely no latent talent and never fully rids himself of cowardice, but at the same time maintains a (perhaps dubious) set of personal morals. Probably my favorite example outside of this is Kenichi’s frenemy Niijima, who looks like a cross between Spock and a goblin. At the outset you presume he is just a tormentor for Kenichi but really establishes himself as a lovable, if frustrating, scamp. He also helps to date the show when he whips out a “state of the art” PDA and waves it in the main characters face. Transfer student/fan service magnet/love interest/secret asskicker Miu is also a great character, especially as she gets a good portion of the best fight scenes in the show.

Sprinkled throughout the show is a healthy dose of humour, usually at the expense of Kenichi, to the extent that the majority of the notes that I wrote down for this review are prefaced by “haha”. (Examples of these notes include “Magical hidden hunting rifle”, “Luchadore in a suit!”, and “Excellent Jiu Jitsu fashion sense”.) Lots of slapstick, misunderstandings, gags, magically healing fighting series injuries and funny faces help keep the show engaging during all the moments that are not directly related to fighting, and the humour is mercifully taken out for important battles to prevent diluting the tone or drama.

The show also has a liberal application of cheesecake, although mercifully it does not pile it on too thickly or for too long. It also does not feel insidious or gross, something which I never thought I would write but that is the tone that a lot of more recent fan service has taken and so feels conspicuous by its (thankful) absence. The show does have some bizarre gender politics however, oscillating between Kenichi’s exhortations of “I don’t fight women!” and then having female cast members demolish him/another character/ a nearby wall while decrying this attitude as outdated. The fact that this is brought up and then dropped multiple times felt weird as the show seemed to shy away from the conflict every time it raised it. That being said, the female cast are perhaps the most interesting fighters in the series sand are not treated as damsels in distress thankfully.

There is one achilles heel that I need to point out however. Most episodes start with a recap of the previous one, and towards the middle of the set these get longer and longer until they take up almost the whole first half of the episode. Multiple times I thought I had pressed the wrong “skip” button on my DVD player only to find that, yes, the recap was in fact that long.

I watched the majority of the show with the dub turned on (a rarity for me) as I honestly found myself preferring it after I got past the rocky first episode. Carrie Savage in particular turns in a great performance as Miu, able to switch between sweetness-and-light to I’m-going-to-punch-you and back again with great flexibility. In fact the dub script and direction has an overall level of care that I rarely hear and wish was more commonplace than it actually is. One note to make here is that the background audio is a lot quieter on the dub track than it is on the original japanese audio, but not to the extent of being a detriment in either case.

There isn’t much to say about the art, which is why I left it for the bottom of the review. The show looks somewhat dated due to its 4:3 aspect ratio and rather restrained use of digital animation, but it uses its budget to great effect and outside of the odd slip or cheap moment it looks absolutely fine. Where it matters - i.e. during fight scenes - it looks great and helps to enhance the action. One particular stylistic thing it does to great effect is adjusting character’s eyes - turning them into black pits or shining light out of them at different times to lend them some punch.

I honestly did not expect to like Kenichi: The Mightiest Disciple as much as I did. I certainly did not expect to find myself riveted to the sofa watching the whole series through in a day! True, it does not do anything outlandish, but the things it turns its attention to are done so damn well which makes for a tight, enjoyable production. While the middle of this set loses its way a little bit in filler and dancing around the storyline, it quickly pulls itself together for the ending, which leads up to a nice little cliffhanger at the end of the set. Another twenty-four episodes is yet to come, and I frankly can’t wait to see it.

English 5.1 and Japanese 2.0 audio with English subtitles. Extras are contained on the 4th disc of the set, and consist of clean opening and closing animations.

Review written with the assistance of check discs provided by Fetch Publicity.

9
Engrossing from the start, this show punches well above its weight.
LATEST REVIEWS