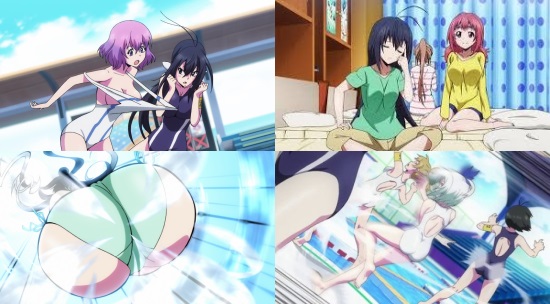 When should something just flat out not work? That’s a question that springs to mind often whilst watching Xebec’s new show for this season. All the elements are wrong: A fan-service oriented sports series. A made-up sport. Over-the-top Dragonball-style attacks (and of course, attack name calling). Keijo should just not work at all no matter how many exclamation marks you add on to the end. (eight of them?!!!!!!!!) Here’s the thing though, between you and us readers - this might actually be the best show this season...

In an alternate modern day world the new sport of Keijo, in which girls stand on a floating platform and must knock each other into the water using only the power of their breasts and buttocks, is hugely popular. Girls want to become the idolised celebrity players (known as Prize Queens), the organisers love the high-stakes gambling that’s involved and the men... err, admire the sporting endeavour and want to see a good fair game played. The sport is so successful that high schoolers can enrol in training schools designed to educate and train the next generation of players in everything from tactics to diet. Nozomi Kaminashi is one such hopeful arriving at her training school ready to do whatever it takes to win with a carefree, can-do attitude and a bag of moves she hopes will tip the balance in her favour.

Things won’t be too easy though. First she finds herself in a dorm room that has a reputation for its occupants quitting, the school won’t even let her fight on the ‘land’ and she’s endlessly teased (nicely though – this isn’t a bullying kind of show) by the members of the elite class who hold a breathtaking array of privileges. Still, it could be worse. It’s not like her teacher is going to lock her into a full-body grip-trainer suit or anything....

Okay, okay, so Keijo isn’t exactly going to be winning any awards for its drama but frankly who care when you’re having this much fun? I don’t mean in any kind of sleazy way either as Keijo sticks firmly to the old 1990s way of fan service and doesn’t go in for nudity so much as just flashing a lot of skin. No, the fun here comes from just how straight the cast play things despite going so far over the top that they never bother to come down. There’s such conviction in everything the series does but rather than feel out of place it just keeps on effortlessly putting a bigger and bigger smile on your face. Hearing the characters talk in deadly serious tones about the dangers of ‘titty-hypnosis’ or the ‘Vacuum Butt Cannon’ are ridiculously, fantastically fun and almost every episode has at least one glorious moment that’ll send you reaching for the pause button so you can stop laughing and get your breath back.

Xebec have really pulled out all the stops for Keijo which must have an absurdly huge budget for this kind of show, easily showing some of the highest production values of anything the season. Things do drop a bit after the first episode but still look fantastic and Hideya Takahashi’s direction proves to be exactly what the show needs so there’s rarely a drop in the fun. The Japanese voice cast are absolutely on form as well with everyone really getting into the spirit of things.

When I suggested that Keijo might be the best show this season I really wasn’t kidding. It’s proving to be a great season but only a few shows have been absolute stand-outs and of all of them Keijo is almost unrivalled in how much I look forward to the new episode every week.  If you watch one new show this season, why not make it the one that’ll put the biggest, longest lasting smile on your face?

You can currently watch Keijo!!!!!!!! in streaming form on Crunchyroll.