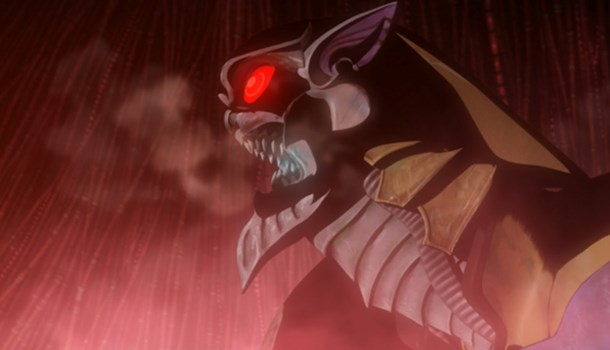 It's taken an age to get here, but finally the sequel to the stunning and confusing Karas: The Prophecy has arrived, with the aptly titled Karas: The Revelation.

Almost every criticism about the oblique and fuzzy plot of the original has been addressed with this release, and it's all the better for it. No longer just an excercise in top-noth visuals, Karas has added meat to the story, and everything we learn here infoirms the prequel, begging you to watch it again so that you can see it all and pick up threads you may have missed the first time around.

When we left Karas, his comatose human host had been found by his enemies, and after a gruelling battle, he awoke, dazed and confused. The sequel drops us right where we left off, and whilst the first half of the film is spent filling in the back-story of several key characters, the eye-bulging payoff is worth waiting for.

With Eko (former Karas turned nasty) on the brink of gatecrashing the human world with a host of demons, and Karas' guardian Yurine defeated, it all looks rather bleak. Even the arrival of other Karas fighters from neighbouring cities can't deter Eko, and when his plan comes to fruition, it's both grand and intensely grisly. If you have a weak stomach, then expect to feel quite ill by the third act.

In fact the only flaw I can find with Karas is a matter of taste. You can't fault the visuals or the intense, layered storyline (which never lets up from act 1), but if you don't like the sight of human suffering, you may find the bloodthirsty nature of this release a bit hard to take (I know I did!)

That said, the finale is suitably angst ridden, beautifully directed and, come the final curtain, you'll likely feel quite exhilirated by the outcome. Karas is indeed a feat worthy of notice, and every facet, from the animation to the wonderful orchestral score, is nigh on perfect. It's a gory anime classic.

10
Powerful, evocative and rich. Only the bloody execution should deter you from watching a stunning piece of Japanese animation.