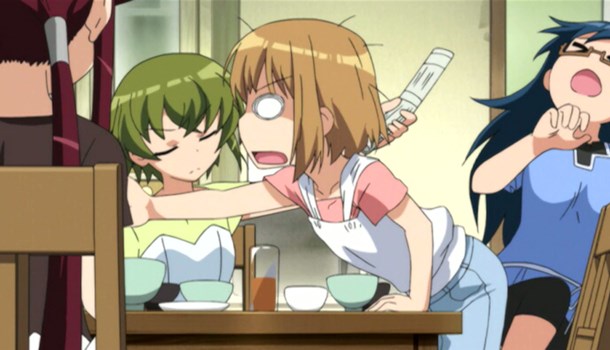 The concept of a Japanese school kid left without parents may be a pretty well-worn cliché in anime, but despite that spare a thought for poor Kana Nakamichi - After losing her parents she's left to live with her grandmother, but once she passes away she's left with literally no relatives left to stay with.

Now, at this point you'd quite rightly expect Social Services (or the Japanese equivalent thereof) to get involved, but not here - Instead, young Kana is left to fend for herself, leaving her needing to find a home and a job immediately.  Thankfully, in no time at all she finds herself stood outside a newspaper delivery firm who are looking for new recruits, and so begins this junior high school girl's slice of life adventures.

Of course, this being a primarily comedy-centric series, you can bet your bottom dollar that the bunch of girls which Kana finds herself working and living at the office building with are far from normal - Thus we're summarily introduced to a newspaper business run by a grade schooler named Saki, a pair in a lesbian relationship and Haruka, a lecherous, perverted (and more often than not drunk) woman with a penchant for young girls.  Only in anime...

Over the duration of the series from here, we watch as Kana learns the tricks of the newspaper delivery trade from remembering routes through to riding a bike, makes new friends (most notably the tsundere Mika, voiced by Rie Kugimiya - who else?) and comes to terms with her sudden need to stand on her own two feet.  Indeed, at times this series becomes almost a little reflective in quite a sweet and heart-warming way as Kana effectively "grows up" on account of her own efforts, without anyone else around to really help her.

That said, melancholy inner reflection isn't exactly Kanamemo's modus operandi, so of course such moments are well and truly offset by this show's constant attempts to inject some humour into proceedings.  Given the fact that the series is derived from a four-panel manga, it's probably not too surprising to hear that this is a rather hit-and-miss affair - There are a few genuinely funny moments, and the closing episodes of the series are actually amongst the best as the show and its characters finally get into their groove, but all too often Kanamemo seems happy to revert to the same old jokes, which usually result in Haruka inappropriately groping and/or fantasising about one of the other girls.  While even this kind of gag can be funny on occasion, the series is simply over-reliant on Haruka's lack of tact or restraint, and this aspect of the show (coupled with some annoyingly obtrusive censorship on occasion) gets old pretty quickly, to the point where these shenanigans overshadow some otherwise touching or more amusing moments.

Perhaps the biggest problem for Kanamemo is that it's competing against some truly big hitters in its particular genre - Azumanga Daioh and Lucky Star both perfected the relatively gentle yet quick-fire slice of life comedy format in their own respective ways, and Kanamemo's fan service and fondling can do nothing to match either.  Similarly, this show's attempts to warm the cockles of your heart simply look twee against the (as yet unreleased in the west) Hidamari Sketch, while all of those competing examples are quite simply far, far funnier to boot.

Naturally, such comparisons don't make Kanamemo a bad series in itself - It's colourful, relatively fun and easy-going, and it will raise the occasional laugh here and there.  If only it didn't get so bogged down in its attempts to woo fans with its more perverted leanings then it could have realised much more of its potential, and that repetitive reversion to type does reduce the series' overall quality to that of a curio for a quiet night when there's nothing better to watch, leaving it far short of other must-watch slice of life comedies.