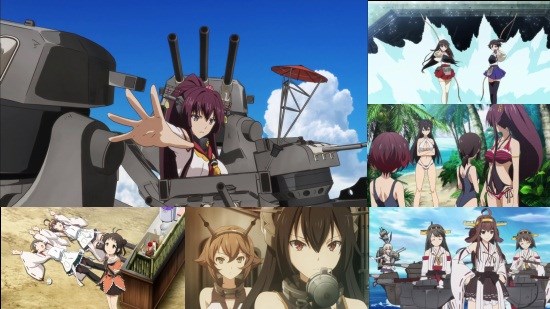 Kanmasu ahoy! The fleet girls set out into some rough seas but they’re still sailing on, and the question at hand is can they make it safely into port with a thrilling finish or is someone due for a keel-hauling?

Following the sinking of Kisaragi at the end of episode three, you could be forgiven for expecting KanColle to move down a darker, more dramatic route, pulling focus onto strong character and action work whilst developing the overall plot. However, other than a few scenes in the fourth episode its straight back to business as usual, as Fubuki interacts with a variety of the other fleet girls. Fortunately however, a reorganisation of the fleet’s structure allows the series to streamline its gargantuan cast somewhat and focus on just a few characters per episode, whilst most of Fubuki’s original squad is relegated to the sidelines (though they still pop in on occasion, poi). KanColle continues to add to the cast throughout the series but the new structure keeps things more focused, and a lot of the new characters such as the super-heavy battleship Yamato and the brilliant battleship Kongou tend to have much stronger and more rounded characters than most of the cast that showed up over the first handful of episodes.

The core plot however is that the show never really manages to progress much and suffers from the same problem a lot of short series end up with, i.e. contenting itself with a very minimal plot and then suddenly trying to cram everything into the last few episodes when they realise there needs to be a dramatic conclusion. It’s a shame as there’s clearly a huge potential inherent in the series, and what little story we do get is genuinely intriguing but it all lacks detail, particularly those regarding what’s actually going on and how it impacts the world beyond the water battlefields of the ship girls. This is compounded by frequent and jarring interruptions when the series decides to cram in a new mechanic from the original games or, on one occasion, when the girls have a curry making contest.

The CGI integration does get a little better (or possibly you just get more used to it after a while) but it never feels entirely natural and it does throw off the pacing a little, particularly in the battle sequences which don’t really have the intensity they need - an issue that the series could have done without given that its nature as a show based on naval combat was already going to be lacking a lot of the speed and dynamic camera movement afforded to shows like Strike Witches or Girls und Panzer. On the other hand, the character designs remain the series greatest strength - full of detail and with a great deal of variety. Seeing Yamato in her full battle gear for example is just stupendous (only fitting for perhaps Japan's most popular and famous battleship) and will have you scouring the net for merch. Unfortunately Fubuki remains the worst designed character of the lot, and whilst the appearance of the games ‘remodelling’ mechanic does hint that this could change the chance it's sacrificed in the name of a gag that’s not all that funny.

From its somewhat confused start through to the anti-climactic final battle, KanColle is ultimately a show full of promise that ultimately goes unfulfilled. It’s a shame, as it’s a series that on concept alone you just want to love, but it feels very much like the staff's attempts to try and please every member of its fan base has backfired by stopping the series from being following through on its potential. It’s by no means a bad series though, and you could certainly do worse that giving it a go, particularly with a second season on the way that might stand a chance of fixing some of the problems we've outlined.

6
The ship girls may be sailing, but the series struggles to stay above the surface.