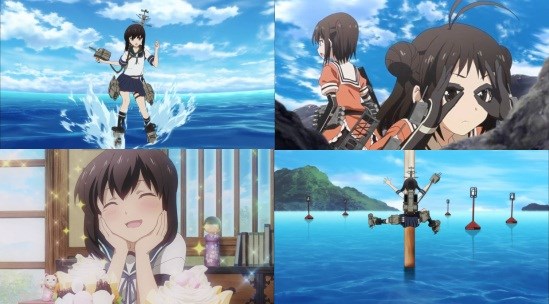 At long last it’s finally time to complete the unofficial trinity of girls with World War II vehicles series! To follow in the wake of the superb Strike Witches and Girls und Panzer, what better way to round things off than KanColle – an adaptation of a game so colossally successful that even though it's only playable in Japan there are over 19 million accounts, and just to have the chance of playing new players have to hope their name comes up in a monthly lottery (thus making any hope of us poor Westerners getting to have a go unlikely).

The plot thus far is pretty much as basic as it gets. The world is under attack from the Abyssal Fleet, an alien-esque army of ships and aircraft. The only weapons humanity have left to fight them are an army of young girls, each of whom is the reincarnation of the spirit of a World War II battleship. Okay, so maybe it is a little complicated....

The bulk of the story is told from the perspective of Fubuki, a special destroyer class vessel (or "kanmassu" as they’re officially termed in Japan) and a new recruit to the defence armada - over the first three episodes she’s going to go through the pretty standard first battle / training / second battle structure that you’d expect from this kind of show although there are a few hints, particularly in the third episode, that there might be scope for some bigger plot developments to come later. In case you’re wondering how much the series is going to be constrained by the plot of the game, the answer is very little. The game's story is little more than an excuse for the character designs and each adaptation of the story over dozens of spin-offs has had its own go, taking little more than the basic concepts and character designs to do with as they will.

There’s a lot to love in KanColle. The core concept is suitably weird but tonnes of fun and serves as a perfect excuse for some absolutely brilliant character designs and some inspired visual gags. My personal favourite are the arrows which are fired by the aircraft carriers which then turn into fighter planes (complete with tiny pilots) to strafe the enemy. Of much more subtle a nature are some of the tricks relating to the true nature of the ships the girls are named after - for example, the bigger a ship was in real life (as determined by how much water it displaces) is depicted by the size of that character's bosom! There’s also clearly a lot of fun to be had from the wide array of characters and their often wacky personality traits which likely also relate to real-world parallels. I wouldn’t be surprised if Sendai, who loves night-time operations, was inspired by the real ship having a lot of successes at night for example.

Sadly, it’s disappointingly downhill from here on. The initial plot may be simplistic but the series offers no real lead-in, instead dumping you straight into things with a first episode which introduces not just the concepts of the series but well over a dozen named characters, each of whom have specific names, ranks, battlegroups and character traits. It’s frankly overwhelming, and by the time the second episode rolls around you’ll be struggling to remember who’s who and why they’re important in any particular scene. KanColle’s peers both had similar plot structures and dealt with large casts but Strike Witches invested a lot of time into its world building before bringing in the majority of its cast and Girls und Panzer solved the issue by making it largely irrelevant who each of the characters were (and there were a lot – the initial line-up has 21 characters and there’s 31 by the end of the series) as they were only really distinguished by which tank they were in. Whilst things may be designed for an already invested and knowledgeable player of the game, for most it’s much harder going than it should be had a little more thought been put into the show's construction.

Visually the series is all over the place. The character designs as I’ve mentioned are amazingly fun and inventive, but they’ve been combined with some really low-quality CGI which detracts from the overall aesthetic. There are also some really bizarre decisions too, such as leaving the Admiral faceless and voiceless. Yes, he’s the representation of the player in the games, but in an anime having a character who's giving such important decisions be off-screen and otherwise incapable of actions is just silly. They’d have been better off cutting him from the series entirely and leaving things to Nagato, who’s more-or-less in charge anyway. It’s also weird that they chose Fubuki to be the lead character as, in a world where there are such great character designs, she has one of the dullest and least memorable designs of the lot!

I’ll admit that I had huge expectations of KanColle - perhaps unfairly given that even upon announcement I was comparing it to a pair of series that I dearly love - but even taking this into account the series is disappointing. This is especially true when you factor in that the creators have had an extra six months to fix the rather glaring issues - the series was originally scheduled to be part of the summer season last year before being delayed at the last minute! I still have hopes that the series can pull things back and the end of episode three gives me hope that they might have something up their sleeves (although they kind of made a mis-step there too, though I can’t talk about why without the spoiler alarm going off), but in the meantime this is entertaining but nothing more.

6
Start bailing, there's a hole in the bottom of this kanmassu!