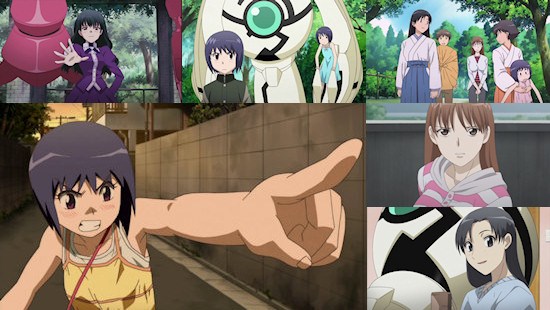 You might have noticed rather a gaping and uncharacteristic time gap between our review of the first three episodes of Kamisama Dolls and the remainder of the series - a gap that can be explained quite simply by saying that it's hard to be motivated to write about this series.  Not exactly a positive opening to a review, is it?

By the end of its third episode, we found ourselves with an ever-increasing number of Seki on the loose, complete with their kakashi, around Tokyo, while Kyohei and company's home village of Karakami is hinted at being the holder of far darker secrets than we might previously have imagined.  For all its sub-par animation and shaky story-telling, there was clearly potential in the concept and story of Kamisama Dolls at that early juncture.

So what do we get from the remainder of the series?  Some hefty and needless chunks of filler, frequent efforts to point out that Hibino has some of the largest breasts ever seen in anime (we'd already noticed, funnily enough), the introduction of yet another Seki just as we're expecting the series to reach its climax, and then a promise that everything we've seen will be explained in an as yet unconfirmed second season.  Great.

In fairness, this is an overly harsh and decidedly cynical view of Kamisama Dolls, and the series certainly isn't all bad by any stretch of the imagination.  The show is at its best when it has its eerie wooden kakashi crashing around Tokyo in battle, and we do get a decent payoff in terms of character development and delving into the back story of some of the major players in the show, the latter coming via some weighty flashbacks.  Even the late introduction of Mahiru to proceedings isn't a complete disaster despite coming at such an odd time within the series as she adds an extra (if rather manic) energy to proceedings.

The real problem with Kamisama Dolls is that it has some great themes at its core - sibling rivalry, love and loss, friendship and rivalry, and so on - but it never gives these themes enough time to really settle or be explored fully.  Instead, we're constantly distracted by the show's flights of fancy or descent into romantic comedy which rarely amuses in its own right and more often simply dilutes what the series is trying to achieve in broader terms.  This is beyond a shame, as the show's concept is backed up with some strong, interesting characters who too often find themselves playing fiddle to comic relief from Utao or fan service from Hibino.

Although Kamisama Dolls ends on a relative high, the memories of what has gone before makes it difficult to feel overly enthusiastic about a second season - plenty of lessons need to be learned by the production team to pace and reveal the secrets the story still has in store in a more compelling fashion.  The trouble is, I'm not sure that many of its potential viewers will be climbing over one another to jump on board that second series.

5
For all of its decent characters and interesting concepts, Kamisama Dolls is too easily distracted by the frivolous, and suffers massively as a result.
LATEST REVIEWS
Girls' Last Tour