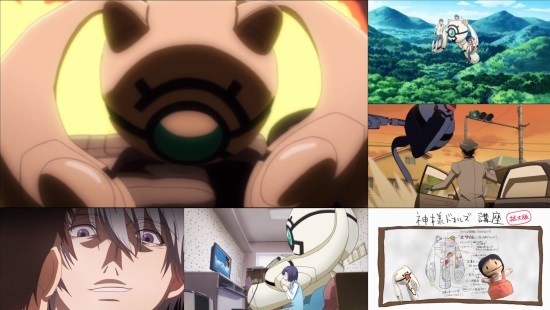 After moving to Tokyo from his small rural village in order to attend University, Kyohei Kuga finally believes that he is in control of his own future and can escape from his past. That is, until the discovery of a dead body brings back not only a lot of painful memories but some familiar faces from the village. The characters in question are Kyohei's childhood friend Aki and Kyohei's little sister Utao, both of whom are 'Seki'. A seki is a special individual in Kyohei's village who is able to control giant wooden autonomous dolls known as “Kakashi” - being which are revered as gods, while the Seki who control them are also given special privileges. Kyohei at one point was the Seki of a Kakashi known as Kukuri, but has since relinquished his rights as a Seki and has passed them along to his little sister Utao. Utao has come to Tokyo in order to track down Aki and bring him back to the village, bringing Kyohei back into a world he would rather forget and abandon.

Kamisama Dolls initially sets itself up as a supernatural mystery drama that quickly jumps between this and an action comedy affair. The series starts with Kyohei, his younger sister and his crush Hibino trying to track down Aki while helping Utao to learn to properly control Kukuri. For the most part things are left extremely vague, with the series keeping aspects about the village, Kakashi and overall plot hidden from the viewer. As time progresses more Seki start to descend upon Tokyo, turning the series into a battle series where impromptu skirmishes between the various Seki and their Kakashi spring out of nowhere, as none of the characters can seem to ask questions first before attacking.

For the most part the action in the series is rather well handled and easy to follow thanks mostly to the unique designs and characteristics of each of the Kakashi. Battles mostly take place as aerial fights with stunned onlookers watching and commenting on the situation. This in turn makes the battles rather brief affairs as to not blow the cover of the Seki and expose Kakashi to the outside world. The battles in the series also revolve around the characters trying to disable their opponents rather than outright destroy them, since the kakashi need to be maintained and repaired, which in turn also brings to the fore some odd relationships and rivalries between certain characters.

There are certain scenes in the show that really set the foundations for these characters and their relationships to each other. A few back story scenes and some of the history between the characters that comes to light during their conversations really starts to give some development to the characters. The main problem with this is there is just not enough of it to matter in the grand scheme of things. Most of the time the characters will be participating in activities such as randomly shopping in Tokyo or eating cake together, meaning that it feels like there is a lot of filler to pad out episodes rather than fully show what's on offer. This in turn ties into Kamisama Doll's biggest flaw - it feels like a show setting the foundations for much bigger things. This is evident in the fact that the action scenes are rather short, showcasing only small snippets of the Kakashi's power. The mystery of the village and reveals of the main plot come into to play in the series rather late into its run, while characters still being introduced near the end of the show is also a big factor.

The series itself sets out some rather interesting themes and plot plot points but never has enough time to fully explore or develop them. Instead it feels like it's just setting things up for a second season. This is further evidenced by the finale having quite a big sequel hook that promises a lot more to look forward to. Unfortunately given that the series originally aired in 2011 and the manga finished in 2013, this means that nothing in the series is ever fully resolved or even fully explained - rather frustrating given that when Kamisama Dolls shows off its plot and action it is extremely fascinating, although when the characters have nothing to do other than sit around the series really drags. The series tries to liven things up with some comedy, mainly at the expense of Utao being reminded she's getting fat from eating cake or reminding the audience of how well endowed Hibino is, which is also coupled into Kyohei falling into the accidental pervert archetype. While the series lightly touches upon these jokes it still retains it's fairly serious tone throughout, making the comedic moments like these feel really out of place.

This leads into a weird facet of the show - the extras contained on the DVD. These extras come in the form of comedy fan service shorts that are really pandering, which include watching Hibino doing push-ups and sit-ups with the camera focusing on her chest, or going on pretend dates with the other female members of the cast. What's most bizarre (or perhaps it explains everything! - Ed) is that a few of them begin with a notice saying that these were fan voted choices. The series also tries to throw in some comedy with it's next episode previews being puppet versions of Utao and Kukuri - there are slightly funny jokes in these, probably the best and most memorable one being a reference to the Konami code.

One final thing to mention about this release of Kamisama Dolls is that it has a passable English dub. The script and acting is above some of Sentai Filmworks previous efforts, although timing with lip movements goes out of sync quite frequently within episodes - some lines match the movements perfectly while at times it looks like they miss entirely. Also, at times it looks like they just give the actors lines and tell them to read them as soon as the characters start talking and to ignore how their mouths move, or that it doesn't matter if they finish their dialogue before the character stops talking. This is a big detractor when watching the English dub but this doesn't really happen often enough for it to be a big issue.

Overall, Kamisama Dolls is a fun series for those wanting a supernatural action series with hints of mystery and comedy thrown in. Its main problem is that the series goes to lengths to set up character relationships and interesting themes surrounding them but unfortunately goes nowhere with them, which in turn leads to the overall disappointment that the series will never show any resolution to the plot points and mysteries it established within the show. A shame as it could have trimmed some of the fat from its filler to at least tie up some loose ends. but instead it grinds everything to a halt and promises a lot more that it unfortunately manages to deliver.

6
A show that feels like it is setting the foundations for a second season, dipping its toes into plot points and themes without ever really getting its feet wet.