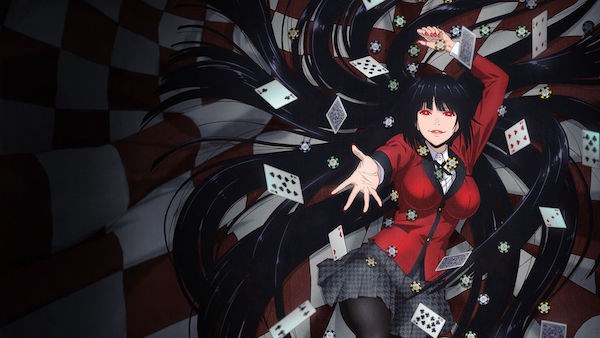 Kakegurui is a name which was completely unknown to me, despite all five volumes of the manga (Kakegurui – Compulsive Gambler) having been available in the west for some time now, courtesy of Yen Press. In fact, all I knew of the series was from a series of screencaps, which our own Robert Mullarkey shared one day on our twitter channel. Those sceencaps showed various unique facial expressions from the main character and her friends. And they were truly sublime, I was in love from first sight.

Kakegurui is the story of Yumeko Jabami, a second year transfer student who has joined the elite Hyakkaou Private Academy. Hyakkaou is a school to which the rich, famous, and powerful in Japanese society send their children. The Academy, and its ruling student council body, have set a rule within the school whereby the status of students is based on their abilities (and their success) at gambling. And, of course, this takes place with the students' real money on the line. Meaning those who aren't very good at gambling can end up indebted to those who are. Thus, the school becomes split by gambling ability: those who are able to win, either through skill or the ability to con others, are considered superior, while those who can't are forced to become 'pets'. The pets are forced to either forfeit their futures or become servants to their creditors.

Yumeko Jabami is not an ordinary student, she is a compulsive gambler. Yumeko doesn't just enjoy gambling, she is almost aroused and obsessed by the risk and the thrill of it all. Luckily she is also an incredibly gifted gambler, both in terms of analytical skills and the ability play her opponents. Add to that her stunning physical attributes, her seemingly naive confidence, and her fierce intellect, and it is hard not to get your "gambling freak" on when she is on screen.

However, Yumeko isn’t the only highlight this series has to offer. When she enters the school she encounters Ryota Suzui, a bit of a wimpy bloke who has fallen into massive debt to another student, Mary Saotome, who is the current gambling queen of the class. Ryota is a pet, Fido to his class mates, but Yumeko doesn’t see this lowly status as an obstacle. They become friends after Yumeko’s first gambling opportunity, which is a game of rock paper scissors against Mary. Now, this is not your average game of rock paper scissors, and while staking her entire fortune on this game of chance Yumeko discovers that Mary has her cheating claws into the entire class. Needless to say, Yumeko gets her gambling freak on, and things get interesting as the stakes get higher, and higher, and higher.

From this first battle scene alone, it's understandable why gambling can be such an addictive pastime. And it's clear that Yumeko’s aim isn’t really to get rich, she just craves the thrill of risking it all. The ultimate series of gambles lies before her, in the form of the representatives on the Student Council, and the President herself. Each boasts their own gaming prowess, their own unique skill set, and it will be up to Yumeko to show them her own way.

Netflix has brought this series to our (online) shores with both a Japanese and English dub. My advice is to stick to the Japanese version, as half of the emotion has been lost in translation. It's not quite stripped out, but is certainly misrepresented by the English cast. To act like the characters, to be that obsessed, it is a quintessentially Japanese characteristic I think, and something that is best left to the original audio. The animation is superb as is the direction, especially with the facial expressions and the settings for the gaming battles (and those glorious thighs). All this sets you, the viewer, up for a truly happy experience. With all of the episodes available on Netflix (at the time of writing), I found that Kakegurui was all too easy to binge watch and I had finished before I knew it. Though thankfully more is to come, with a second season already announced and a live action drama also hitting the screen. While this isn’t available here yet, given Netflix’s proclivity for Japanese Dramas, it may be seen soon!

All we need do now is await the physical release! Until that momentous day arrives I suggest you enjoy streaming this incredible show, which offers style, substance, and sexy gambling, with an addictive story and characters. It has turned out to be one of my favourite shows of the year, and I hope it might become one of yours too.

You can currently watch Kakegurui Season 1 in streaming form on Netflix.

9
Get your gambling freak on!